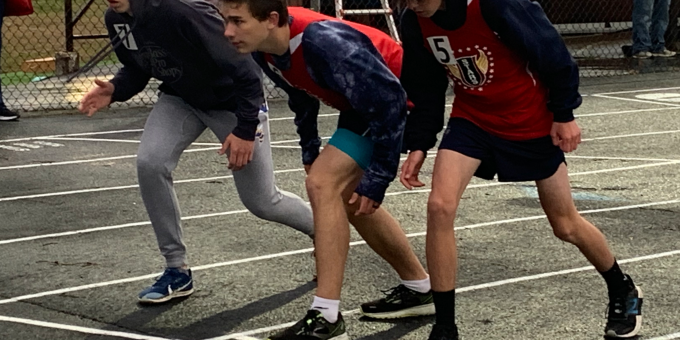 BEDFORD – On the Weather Channel phone app, the official temperature hovered below 40 as the first starter’s pistol was fired. On the “feels like” scale, where the wind chill is calculated and displayed, it should have simply read “frostbite.”

Under the most brutal conditions, Bedford North Lawrence opened the 2022 season and won track’s version of Survival. Ribbons and points weren’t awarded for place, they were earned for mental toughness as the Stars recorded wins over Barr-Reeve and Mitchell on Thursday night.

With two individual victories from Noah Carter and Jonah Bailey, the Stars ran away with the boys meet, scoring 105 points to overwhelm Barr-Reeve (30) and the Bluejackets (28). With Autumn Hall and Lindley Steele posting double wins, BNL totaled 73 points to edge the Vikings (70) and Bluejackets (10) in the girls meet.

Times and distances were irrelevant, in reality. The bitter cold, combined with spitting drizzle, meant most racers wore sweats, heavy sweatshirts and toboggans just to make the finish before huddling under a blanket. On a night when a bonfire would have been perfect, just getting to the line was an accomplishment. What was really measured was the willingness to compete, to adapt and overcome. This wasn’t boot camp for the Marines, this was track in March.

“We just wanted to compete, and they ran hard,” BNL boys coach Brett Deckard said. “Times and distances were not good. Who would be good in this? It was just to compete and get a meet under our belts. There wasn’t a lot of whining, they wanted to run.”

Well, running was one way to keep warm.

The main hurdle was avoiding injury. Pulled muscles in the cold and slipping on the track were real issues.

“This weather is really tough,” Haste said. “The track was slick. By the second lap, I knew how to push. But the harder you pushed, the more you could slip. The mentality wasn’t the best right now, so being the strongest of mind was the best idea.”

In close competition, where every point mattered, BNL coach Jim Lewis learned a lot about his young team.

“I learned it was really cold and wet, and for our kids it didn’t matter to them,” Lewis said. “They gave all they had. It was a night well spent, even though the conditions were really bad. We learned some things about kids.

“How do you compete? That’s what we look for in any meet, not just in these conditions. There are great athletes out there, and we want to compete with them. We want kids to put their heads down and do their level best every time.”

BNL will return to action on Tuesday, visiting Bloomington North to tangle with the Cougars and Brown County.