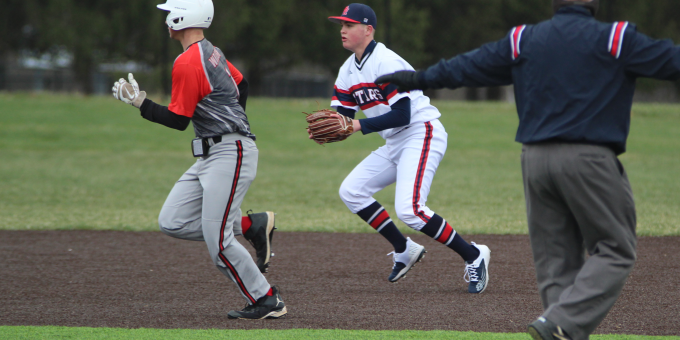 BEDFORD – The season opener went South, by way of Terre Haute, in a hurry. Not to a southern climate, not with the wind chill and misery index dipping to extremes, not with conditions more suitable for an Arctic expedition. There was no hiding from the wind, no hiding the fact Bedford North Lawrence struggled with the basics – throwing it and catching it.

After the two young teams battled to a 2-1 difference during three innings of quality, BNL broke down, allowing 15 runs during the next three frames. South’s Tucker Helton, one of the few seniors on the field, had four hits and drove in four runs to highlight the eruption and runaway.

“Obviously we’re disappointed with the way we played, and the outcome,” BNL coach Jeff Callahan said. “We’ll learn a lot from tonight and move forward. We talk about getting three outs on time, and we didn’t do a good job of that. Then we struggled throwing strikes at times. Those things make it tough.“

The Braves took a two-run lead in the second on a double by Jackson McFarland, a single by Ross Olsen and walk to Nathan Wright that loaded the bases. The runs scored on a ground out and wild pitch. BNL answered with a run as Ryker Hughes walked, scampered to third on Cade Mungle’s single to right, and scored on Trace Rynders’ sacrifice bunt.

“We put the ball in play, put some pressure on them,” South coach Kyle Kraemer said.

BNL got two more runs in the fifth. Kline Woodward cracked a double to deep left, Jonny Stone followed with an infield single, and Kylar Fisher roped a run-scoring double to left. With the bases loaded, Rynders beat out an infield hit to score the final run.

Woodward suffered the loss on the mound, although he surrendered only two earned runs in three-plus innings of work. The Braves, who started four sophomores on the infield, finished with 10 hits, with Olsen totaling two. Levi Weidenbenner had three RBIs. McFarland pitched the first four innings to earn the win, striking out five.

Stone had three hits and Woodward added two for the Stars. The only defensive highlight was authored by left-fielder Hughes, who gunned down a runner at the plate. The weather, while brutal, was not a factor in the outcome. Inexperience and early-season nerves were.

“That’s just part of March in Indiana,” Callahan said. “We all deal with it. I don’t think it affected us early. I’m not going to make excuses. It’s like I told the kids, it’s mind over matter. If you don’t mind, it doesn’t matter. Weather is not controllable.

“Kline pitched well, did his job. We had some good at-bats, some hard-hit balls for hits and for outs. So there were positives, and there are things we need to work on. We’ll get better.”

BNL will return to action on Saturday, hosting Franklin at 10 a.m. and Evansville North in the finale of a three-game event. Franklin and North will clash in the second game of the day.