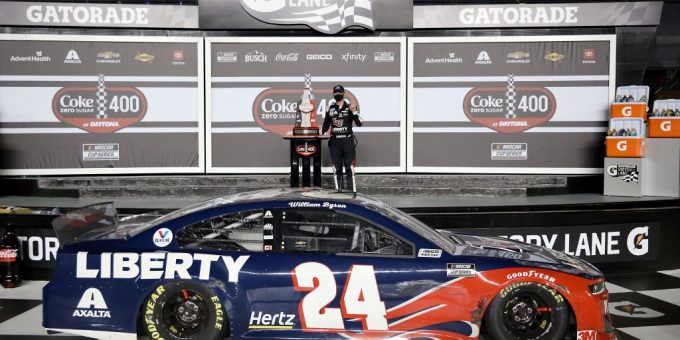 HAMPTON, Ga. – William Byron managed to keep an angry pack of drafting cars behind him for the final 10 laps of Sunday’s Folds of Honor QuikTrip 500.

In a race that produced 46 lead changes among 20 drivers — both track records — Byron crossed the finish line .109 seconds ahead of Christopher Bell and .145 seconds ahead of Ross Chastain.

Bell, however, was penalized for passing below the boundary line on the backstretch on the final lap and was demoted to 23rd, the last position on the lead lap. That elevated Chastain to his second straight runner-up finish.

Byron took the lead from Bubba Wallace on Lap 316 of 325 and held it the rest of the way.

There were 11 caution periods for a total of 65 laps. Only 23 of the 37 drivers in the race finished on the lead lap.

Almirola finished fourth in Stage 2 to earn seven bonus points. Almirola led once for six laps to increase his laps-led total at Atlanta to 50.

Chase Elliott leaves Atlanta as the championship leader with a seven-point advantage over second-place Joey Logano.