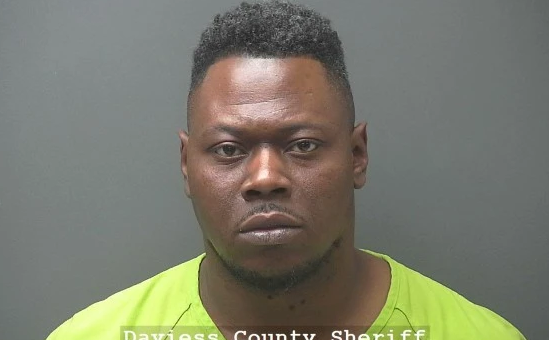 WASHINGTON – On March 13, 2022, at approximately 12:56 PM, Central Dispatch was notified by the Indiana State Police that there was a Chrysler 300 Southbound on I-69 at speeds more than 130 MPH.

Dayshift Officers with the Washington Police Department and the Daviess County Sheriff’s Office began observing for the vehicle at the Washington exit. A short time later, officers observed a vehicle matching the description of the reported vehicle traveling southbound on I-69 at a high rate of speed.

Officers attempted to stop the vehicle, but the driver continued to flee. The pursuit ended a short time after spike strips were utilized in Pike County by ISP and the Pike County Sheriff’s Office. Also assisting in the pursuit was the Petersburg Police Department.

The driver, identified as 37-year-old Toddrick Ogburn, attempted to flee on foot but was taken into custody without incident. During a search of the area where Ogburn was taken into custody, officers located more than 2 pounds of pills with markings consistent with oxycodone. Officers further located marijuana and cash in the vehicle.

Ogburn was transported back to the Daviess County Security Center on charges of Dealing a Schedule II Controlled Substance, Resisting Law Enforcement, and Habitual Traffic Violator.

On March 14, 2022, Officers with the DEA Task Force (DEA, WPD, DCSO, EPD, VCSO, PPD) continued the investigation into Henderson, Kentucky with assistance from the Henderson Police Department and the Henderson County Sheriff’s Office.

A search warrant was applied for and granted to search Ogburn’s residence. Officers reported locating approximately 300 more grams of pills with markings consistent with oxycodone, marijuana, and a small amount of cash. The pills from both incidents will be sent to a laboratory to be further tested for Fentanyl.