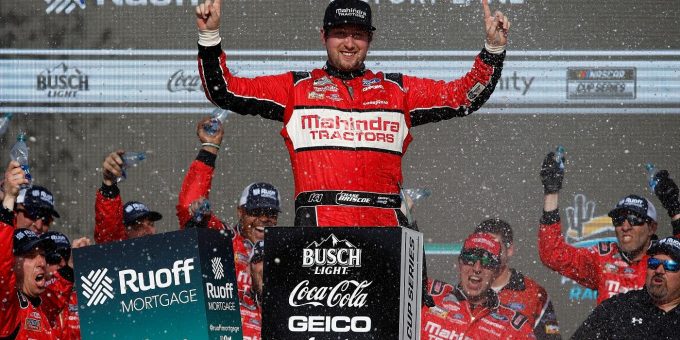 PHOENIX – Mitchell native Chase Briscoe collected his first career Cup Series win in the desert Sunday when March Madness broke out at Phoenix Raceway. By race’s end, it came down to three drivers who had never before visited Victory Lane, with Chase Briscoe ending up the king of the dance and NASCAR’s newest first-time winner.

After holding off Chase Elliott over a long green-flag run and then Ross Chastain and Tyler Reddick on a pair of late-race restarts, Briscoe drove away to take the checkered flag and win the Ruoff Mortgage 500 at Phoenix to score his first career Cup win in his 40th start. With his win, Briscoe became the 200th different driver to win a race in the history of the NASCAR Cup Series, and also brought Stewart-Haas Racing’s No. 14 back to Victory Lane for the first time since 2018.

“That’s unbelievable. I was crying the whole last lap. I mean, this is definitely a team win,’ Briscoe said. “I’ve got to thank everyone that has gotten me to this point. Seven years ago, I was sleeping on couches, ready to give up. They gave me an opportunity and it’s led to this. I am so blessed to be driving at the organization, the team, the car that was my hero growing up. To get this 14 back in victory lane, to do it with Mahindra Tractors, their first year in the sport, everybody that’s believed in me. It’s unbelievable.”

Briscoe’s victory in the Ruoff Mortgage 500k marked the 93rd overall win for SHR. It was the organization’s 67th points-paying NASCAR Cup Series victory and its seventh at Phoenix.

Harvick earned his second top-10 of the season and his 28th top-10 in 39 career NASCAR Cup Series starts at Phoenix. Harvick’s 28 top-10s at Phoenix are the best among all NASCAR Cup Series drivers, past and present. Next, best is Kyle Busch with 24 top-10s, who is tied for second all-time with NASCAR Hall of Famer Jeff Gordon.

“It was a good day for us. Restarts weren’t 100 percent our strong point,” said Harvick. “We had a bit of a brake shake issue that kept pulling the car to the right under braking, so I couldn’t get into corners like I wanted to. Still, a good day and the car ran well. I just couldn’t really connect all the corners altogether through the day. Putting an SHR car in victory lane and running inside the top-five all day for us is always a good day.”

This was Harvick’s 18th straight top-10 at Phoenix – a streak that started on Nov. 10, 2013, when Harvick won his fourth NASCAR Cup Series race at Phoenix. Harvick is now tied with NASCAR Hall of Famers Richard Petty and Dale Earnhardt for the most consecutive top-10s at a single track, as both Petty and Earnhardt earned 18 straight top-10s apiece at North Wilkesboro (N.C.) Speedway. Since joining SHR in 2014, Harvick has never finished outside of the top-10 at Phoenix, and he has scored five of his nine wins. Harvick finished eighth in Stage 1 to earn three bonus points and third in Stage 2 to earn eight additional bonus points.

“Congrats to Chase. So happy for them. We had speed and just fought some balance issues all day, but kept getting our Smithfield Ford better and better,” Almirola. “We continue to fight all day to try and be there in the end. I’m so proud of this team for another hard-fought day. We didn’t keep the top-10 streak alive, but we’re still competitive at every track we visit, and that’s all you can ask for. It was a good day for our entire organization. Looking forward to Atlanta next week to keep it going.”

Almirola finished fifth in the season-opening Daytona 500, sixth Feb. 27 at Auto Club Speedway in Fontana, California, and sixth again in the series’ prior race at Las Vegas Motor Speedway. Since joining SHR in 2018, Almirola has finished among the top-15 at Phoenix all but once – 22nd in November 2019.

Cole Custer (Started 25th, Finished 16th / Running, completed 312 of 312 laps). This was Custer’s second straight top-20 at Phoenix. He finished 13th in the series’ prior visit to the track last November.’

“It was a solid, mistake-free day,” said Custer. “We had good long-run speed, but we just couldn’t get it on the short run. Overall, it’s something we can build on, just wish we had a little bit more.”

The next event on the NASCAR Cup Series schedule is the Folds of Honor 500 on Sunday, March 20 at Atlanta Motor Speedway. The race begins at 3 p.m. EDT with live coverage provided by FOX and SiriusXM NASCAR Radio.