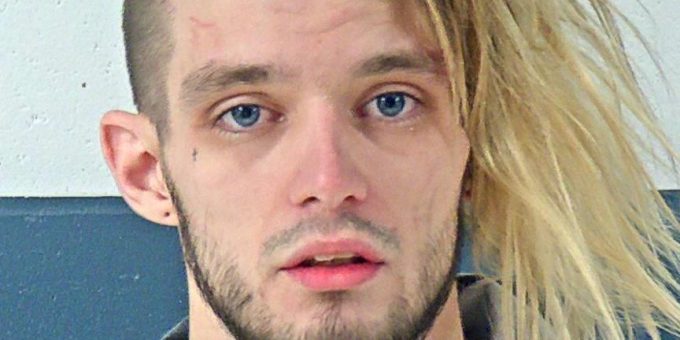 BEDFORD – A Bedford Police officer stopped and arrested a driver after realizing the driver was wanted on active warrants.

The driver of the blue Ford Edge, 25-year-old Taylor Gerkin,  stopped on J Street jumped out of the vehicle, and ran between houses, cutting through yards and then down an alley located between K and J streets.

The officer rounded the corner of Fastenal and saw Gerkin run east through the grass. The officer got out of his vehicle and ran after Gerkin.

Gerkin tripped and fell and the officer was able to detain him.

While searching Gerkin, the officer located a syringe that contained meth.

K9 Maximus arrived on the scene and did an exterior sniff of the vehicle and alerted officers to possible drugs in the vehicle.

Officers utilized a Lock Out Kit to gain entry because they were unable to locate the keys to the vehicle. Inside the vehicle, officers located 33 white pills, along with three partial white pills, loose within the front passenger door compartment. Officers were able to later identify them as 100 mg Trazodone Hydrochloride by using the drugs.com pill identifier, which listed them as a prescription drug. Also found in the vehicle was a large number of unused syringes.  Once in custody, officers noticed that Gerkin was sweating profusely, his pupils were pinpoint, his speech was lethargic and at times unintelligible.

Gerkin denied the entire incident and even attempted to report his vehicle stolen. Gerkin told officers he found the syringe that was located in his pocket on the ground and that he had no idea what was inside of it.

Gerkin was then transported to IU Health Bedford for a blood draw and those results are pending.