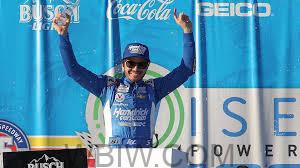 FONTANA CAL. – Reigning NASCAR Cup Series champion and 2021 wins leader Kyle Larson claimed his first win of 2022 in his home state of California on Sunday when he took the checkered flag in the Wise Power 400 at Auto Club Speedway, the second official race of the season and the first Cup Series race at ACS since 2020.

Austin Dillon finished second, Erik Jones was third, Daniel Suarez was fourth and Joey Logano rounded out the top-five. His margin over second-place Austin Dillon was .195 of a second.

Larson and Logano were among a handful of drivers who dropped to the back for the start of the race — Logano because of repairs made to his car after a qualifying crash Saturday and Larson after work was done to the ignition of his car before the race.

Tyler Reddick led nearly half of the 200-lap race, running up front for 90 laps before a flat tire sent him into the wall on lap 152 while leading. William Byron, who also led laps, got loose and slid up the track into Reddick’s car.

Jones, who led early and ran second to Reddick for a significant portion of the race, inherited the lead as a result of Reddick’s misfortune. Logano and Larson, then, took the top two positions on the restart that followed.

The Reddick/Byron wreck was the first multi-car crash of the race. The largest crash came on lap 158 and involved Brad Keselowski, Harrison Burton, Darrell “Bubba” Wallace Jr., and Austin Cindric.

There were 12 caution periods for a total of 59 laps. Twenty-three of the 36 drivers in the race finished on the lead lap.

Almirola earned his second top-10 of the season and his third top-10 in 14 career NASCAR Cup Series starts at Fontana.

This was Almirola’s second straight top-10. He finished fifth in the season-opening Daytona 500. This is the first time in his 11 full-time Cup seasons that he has started a year with back-to-back top-10s.

“We sure had our hands full. It was a crazy day, wow. These cars are certainly a handful and we worked on it all day and made it to where it was driving better. Then we got some damage and the guys worked on it and got it fixed. It was a solid day for us to come out and have a good start to the West Coast swing and keep our cars in one piece,” said Aric Almirola, driver of the No. 10 Rush Truck Centers Ford Mustang.

Harvick earned his first top-10 of the season and his 14th top-10 in 28 career NASCAR Cup Series starts at Fontana.

This was Harvick’s third straight top-10 at Fontana. He finished ninth in 2020 and fourth in 2019. Since joining SHR in 2014, Harvick has only two finishes outside the top-15 at Fontana.

“We actually had a really good car, and then every time we would get close we would have something go wrong. So, we just had so many things go wrong that it was hard to keep our track position, but I’m really proud of my team. They did a great job of battling through everything and giving us a shot out there,” said Kevin Harvick, driver of the No. 4 Subway Ford Mustang.

“I was really happy with the progress our team made. We made really good adjustments all day and got our car better. We got a little off there at the end and I wish I did a few things different on the restarts but, overall, it was a solid day and we got some stage points and we can take that into the next one,” said Cole Custer, driver of the No. 41 Production Alliance Group Ford Mustang.

“I think dirt guys like (Kyle) Larson and (Tyler) Reddick and me – we like it slick and worn out to where you can move around and search for grip. I felt like I was able to try different lanes and try to find grip. I felt like our car was really good too, and that obviously helps. This place has always been really good for us guys and I think that is just because of how slick it is. Track position is a lot of it, but at the same time, we started 24th and were able to drive to the lead, so I can’t blame it all on track position. I think toward the end of the race as guys got better and better throughout, it gets harder and harder to drive up through there. I think after I got in the wall a little bit – you never really know how much that hurts you – but track position is always important,” said Chase Briscoe, driver of the No. 14 Mahindra Tractors Ford Mustang.

The next event on the NASCAR Cup Series schedule is the Las Vegas 400 on Sunday, March 6 at Las Vegas Motor Speedway. The race begins at 3:30 p.m. EST with live coverage provided by FOX and SiriusXM NASCAR Radio.