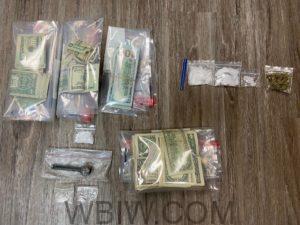 WASHINGTON – Local authorities seized several grams of meth and more than $10,000 in cash during drug investigations.

On Friday, February 18th, officers with the Washington Police Department, DEA Task Force, Daviess County Sheriff’s Office, and Indiana State Police seized more than $10,000 in cash and drugs during two traffic stops and after serving a warrant at a home in the area of Maxwell Avenue in Washington.

The investigation began with a traffic stop. The driver of the vehicle 41-year-old Jose Guerrero Alcantara, of Washington, was arrested after officers found a large amount of meth in his vehicle. Alcantara was arrested on drug charges.

A short time later, during another traffic stop. The driver 40-year-old Jorge Gonzales Ramos and his passenger 28-year-old Noelia Aviles Corado, both of Washington, were arrested on drug charges after a canine unit located a large amount of meth in the vehicle.

Later that day the investigation led officers to serve a narcotics search warrant at a residence on Maxwell Avenue, There officers found more meth and a large amount of cash.

In total, officers seized approximately 29 grams of meth and more than $10,000 in cash.