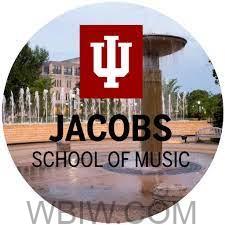 BLOOMINGTON – A concurrent resolution honoring the Indiana University Jacobs School of Music on the 100th anniversary of its founding was presented on the State Senate floor Thursday, Feb. 17.

The resolution congratulating the Jacobs School of Music was read by State Senator Shelli Yoder, from District 40, during the Senate’s afternoon session. The occasion also included a performance by the Pacifica Quartet, the school’s Grammy Award-winning quartet-in-residence.

“For a century, the Indiana University Jacobs School of Music has immersed us in extraordinary music and dance and is among IU’s proudest accomplishments,” said IU President Pamela Whitten. “This recognition of the Jacobs School by the Indiana General Assembly illustrates the special role our world-renowned music school has locally and statewide.”

“We are grateful to Senator Shelli Yoder and the Indiana General Assembly for this wonderful honor,” said Jeremy Allen, David Henry Jacobs Bicentennial Dean (Interim). “It means a great deal to all of us at the Jacobs School to receive this recognition of our work, our success, and our impact, which is felt not just throughout the state but around the nation and the world. I hope that every Hoosier is as proud of the extraordinary achievements of the Jacobs School in our first century as we are proud to call Indiana home.”

The IU Trustees approved the School of Music in March 1921, and its first students matriculated in August 1921.

Now one of the world’s premier music schools, the Jacobs School of Music has the most comprehensive music program in the United States and the largest resident faculty of any music education institution.

Approximately 1,600 students from all 50 states and more than 55 countries study in a conservatory atmosphere amidst the academic resources of a major research university with 170 full-time faculty members who are among the finest performers, scholars, composers, and educators today.

The Jacobs School of Music offers a breadth and depth of musical training, education, and performance opportunity that is unparalleled. Performing ensembles include six orchestras, nine choirs, three bands, four jazz ensembles, and a variety of chamber ensembles contributing to the school’s more than 1,100 performances each year.

Annual performances also include five fully staged operas, three ballets, and one musical presented in the school’s state-of-the-art concert hall, the Musical Arts Center, featuring the second-largest stage area in the country, surpassed only by the Metropolitan Opera House.