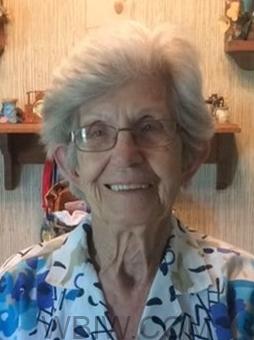 Born July 1, 1927, in Bedford, she was the daughter of Leonard L. and Ruth (Watson) McPike. She married Wayne Edward Meadows on March 20, 1946, and he preceded her in death on December 27, 1986. She was a homemaker and member of the Judah Church of Christ.

She was preceded in death by her parents, her husband, four brothers, Charles McPike (in infancy), William McPike, Merle McPike, and Eli Warren McPike; a granddaughter, Brittany Meadows.

Funeral services will be conducted at 1:00 p.m. on Monday, February 21st in the Elmwood Chapel of the Day & Carter Mortuary with Bro. Larry Ritter officiating. Burial will follow in the Judah Church of Christ Cemetery. Visitation will be from 11:00 a.m. until the hour of service on Monday at the mortuary.

The family asks that attendees wear masks. Memorial contributions may be made in Martha’s memory to the Judah
Cemetery.