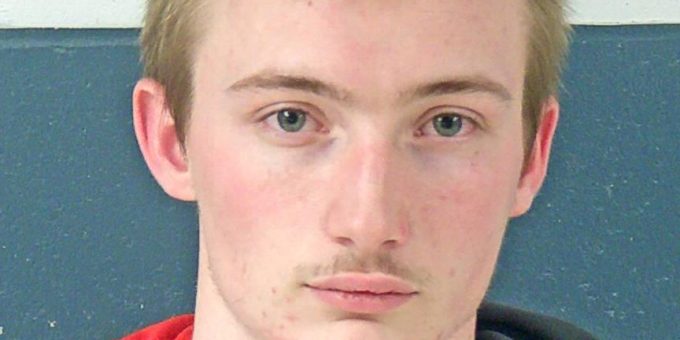 BEDFORD – A Mitchell man was arrested Monday when Bedford Police officers responded to an apartment in the 1110 block of M Street after a report of a domestic fight. The apartment sits behind a residence in the alley.

When police arrived they found 23-year-old Jayden Kline in a vehicle parked in front of the apartment.

Kline told the officers he was to pick up his daughter at 7:30 a.m. at Day & Carter Mortuary, but his ex didn’t show up so he went to her house to wake her.

The officers then spoke to the woman inside the apartment. The woman was holding a small child and there was another adult male in the apartment.

The male’s face was red and he was bleeding. Officers believed the male had been slapped or punched.

The woman told officers she normally does meet Kline at Day & Carter Funeral Home for a child exchange, but that morning Kline had called her and told her he was on his way and showed up at her door.

When he arrived he knocked on the door and when she answered he walked into her apartment.

She then told Kline to get out of her apartment and he was not to be there. She told officers Kline then began walking through her apartment and found the woman’s current boyfriend in a bedroom. Kline and the man then got into a fistfight in the living room.

At some point, Kline allegedly bit the man in the ear and cheek causing redness and bleeding.

Kline then put his fingers in the man’s mouth and began ripping the stitches the man had in his mouth out. The fight finally ended and Kline began fighting verbally with the woman and he finally departed.

The woman recorded the incident on her phone and showed it to the police.

Kline admitted he entered the home and found the other man in the woman’s bed and there was a fight.

The man did not want to file charges because he felt it would cause further repercussions.

Officers said due to the man’s stitches being ripped out and a large bite mark on his face that was bleeding and redness all over his face from being punched, officers detained Kline on charges of battery causing injury, invasion of privacy, criminal trespassing, and residential entry.

Police say there was a no-trespass order on file against Kline preventing him from being at the woman’s apartment.