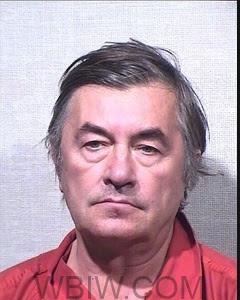 The investigation by Troopers Andrew Garrett and Gavin Ludwig began around noon when a motorist reported observing a 2016 Freightliner pulling a trailer that was driving erratically on I-65 Southbound in Bartholomew and Jackson Counties.  The vehicle was located and stopped near the 54-mile marker, just north of Seymour, in Jackson County.

During the traffic stop, troopers observed that the driver, Mikhail Popov, 62, of Mount Pleasant, South Carolina showed signs of being intoxicated.  Popov was transported to the Seymour Police Department where he submitted to a breath test for intoxication.  The test determined that Popov’s BAC was .225%.

He was arrested and transported to the Jackson County Jail on preliminary charges of operating a vehicle while intoxicated with a prior conviction, Level 6 Felony, and misdemeanor charges of OWI endangerment and OWI with a BAC of .15% or greater.  He was incarcerated pending his initial appearance in court.

Troopers Garrett and Ludwig were assisted by other troopers from the ISP-Versailles Post and Master Motor Carrier Inspector Mary Eglen.  31 Wrecker responded and removed the vehicle from the scene.

The Indiana State Police encourages those who witness unsafe and dangerous driving to call 9-1-1 to report the driving behavior.  Troopers continue to target those who are driving recklessly on our roadways in an attempt to make the roads safer for all motorists.