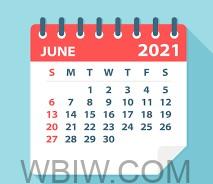 In June 2021 songbirds were dying in Indiana, a North Lawrence County School Board member resigned after being arrested on domestic battery charges and a Bedford man was arrested for causing the death of another.

The state confirms finding dead or sick birds in almost every county of Indiana including Lawrence County.

Officials asked Hoosiers across the state to take down the feeders while the state investigates why several species of songbirds are dying.

Investigators say the birds have shown signs of a neurological illness. Symptoms included swollen eyes with a crusty discharge, breathing trouble, blood from the mouth, and weakness. Death often seems to come pretty quickly to the affected bird. Officials have ruled out Avian Influenza and West Nile virus.

On June 23, 2021, Rusty Garrison submitted his resignation from the NLCS School board of Trustees.

Garrison a sworn member of the Indiana State Police assigned to the Bloomington Post and his girlfriend Tiffany F. Corbin an Enforcement Agent with the Indiana Gaming Commission were arrested on June 12, 2021, on charges stemming from an alleged domestic incident.

Garrison and Corbin were both arrested on a misdemeanor charge of domestic battery.

Charges were dropped against Garrison in December 2021.

Corbin is scheduled to appear in Lawrence County Superior Court I for a pretrial conference on February 15, 2022 at 1:00 p.m.

Bedford man charged for the death of Jannessa Ikerd

Dakota Sykes surrendered to police on June 21, 2021, after a warrant was issued for his arrest.

Sykes, who was 19 at the time of his arrest is facing charges of operating a vehicle while intoxicated causing death, OWI endangerment, OWI, illegal consumption, and driving at an unreasonable speed.

Jannessa Ikerd, 20, of Bedford, was killed in a single-vehicle accident in the 3800 block of Huron Williams Road on Sunday, May 9.

When Lawrence County Sheriff’s Department deputies arrived they found a 2001 Ford Taurus driven by Sykes, had left the left side of the roadway and was “wrapped around a tree on the east side of the roadway.” Officers and first responders found Sykes outside of the vehicle and Ikerd unresponsive and trapped inside. Ikerd, who suffered internal injuries, was pronounced dead at the scene. Sykes suffered chest and head injuries and was flown by a medical helicopter from the scene to a Louisville Hospital for treatment.

On June 9th, investigators received the results of the toxicology report from Sykes’ blood draw. He had consumed alcohol. The result was 0.12