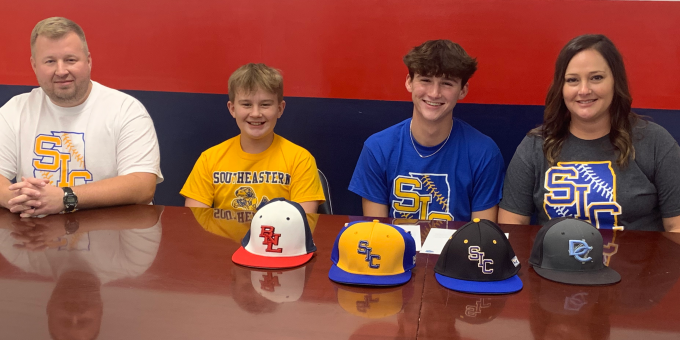 BEDFORD – Grant Dalton started playing baseball at age 5, dragging a bat to the plate to hit off a tee. His future in the game was placed on a tee for the sweet stroke of a pen.

Dalton, Bedford North Lawrence’s senior outfielder, signed to continue his career at Southeastern Illinois College, a two-year junior college program that’s been a stepping stone to other levels. After completing his final season with the Stars in 2022, he’ll fly higher with the Falcons.

SIC, located in Harrisburg (an hour west of Evansville), competes on the NJCAA Div. I level and is a member of the Great Rivers Athletic Conference. The program, now under the direction of coach Jeremy Irlbeck for nine seasons, has sent a long list of athletes to NCAA Div. I and other schools, including three alumni who have made it to the major leagues.

That’s the dream of every kid who’s ever fallen in love with the game.

“Ever since I’ve played baseball, this is what I wanted to do,” Dalton said. “When I visited, I liked the place, and they send a lot of guys to other colleges after two years there. Their conference is the best in the country, so I figured that competition level would be a good place.”

Dalton hit .254 with 2 home runs and 15 RBIs as a junior outfielder for the Stars in 2021. He is working on adding bulk and strength while preparing for the upcoming spring season and the jump to the college level.

“It’s really about getting bigger and stronger,” he said. “This decision was just a relief, after all summer of playing and talking to coaches.”

Dalton, who also played wide receiver in football, plans to major in kinesiology, with the goal of eventually becoming a chiropractor. So he’s got a lot of adjustments in his future. Baseball has always been his passion.

“You have to get your head in the game,:” he said. “It’s not like football, where you can get mad and hit someone. If you get mad in baseball, you’ll probably strike out three times. It’s more mental.”