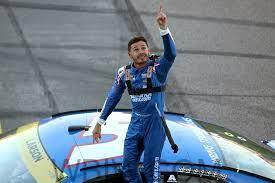 KANSAS – Kyle Larson did the heavy-lifting on Sunday, leading nine different times for a race-high 130 lap to earn a NASCAR Cup Series-best ninth win of the season in the Hollywood Casino 400 at Kansas Speedway.  Larson’s win was the ninth of the season and his first at Kansas. His margin over second-place Chase Elliott was 3.619 seconds.

It is the third consecutive race win for the 29-year old Californian and the second time this season he’s won three in a row. The last time a driver won three straight races twice in a season was 1987 when the late, seven-time champion Dale Earnhardt accomplished the feat.

There were seven caution periods for a total of 33 laps. Only 15 of the 40 drivers in the Hollywood Casino 400 finished on the lead lap.

Briscoe had to drop to the rear of the field for the start after NASCAR assessed the No. 14 team a penalty for unapproved adjustments.

“It was a tough day with the DEKALB Ford. The handling just was never where we needed it to be,” added Briscoe. “The team did a good job of making something out of it, getting one of the laps back that we lost. We will just take it and look to Martinsville.”

Caution was displayed on lap 10 for rain with Briscoe in 26th place. He reported that he needed the car to turn better from the center of the turns to the exit – especially in turns one and two.

After a brief red flag for lightning, the cars returned to the track. The No. 14  DEKALB Ford driver elected to pit for four tires. Briscoe lined up 33rd for the restart.

Caution was displayed on lap 22 for a single-car incident, and Briscoe was scored in 23rd place. The No. 14 came to pit road for right-side tires and fuel. A number of teams made stops for four tires, placing Briscoe in fourth place for the restart.

Briscoe had dropped back to 11th place on lap 40 when he reported that the DEKALB Ford was handling on the loose side getting into turn three and at the exit of turns one and two, noting that he believed the increased wind was playing a role in the handling.

As the laps in Stage 1 wound down, Briscoe lost a handful of positions. He was in 16th place as the field completed the final laps of the stage, fighting to stay on the lead lap. He was passed by the leader on lap 79 and was eclipsed by another lap-down car as the field came around to complete the stage, which resulted in him remaining a lap down to start the second stage.

After the stage concluded Briscoe reported the car was “super loose” getting into the turns and that during the final seven laps of the stage it started to get plowing tight at the exits of the turns.

The team made a series of adjustments, changed four tires, and added fuel, which required a slightly longer pit stop. The result was Briscoe lining up 31st to start the second stage.

The Indiana native quickly went to work and was back to 25th within the first five laps of Stage 2. He reported the racecar was still tight on exit but better on entry.

Briscoe had moved to 24th place when he reported that the tight issue persisted despite the adjustments and that it was particularly challenging at the exit of turn two.

On lap 112, Briscoe made contact with the outside retaining wall at the right rear of the car.

The team elected to short pit on lap 117, making a chassis adjustment, changing four tires and adding fuel. Briscoe was scored in 28th place, two laps down, by the time green-flag stops cycled through.

Briscoe was in 25th when he reported that the tight handling issue continued to be a problem on the No. 14 DEKALB Ford, saying that “it’s like (the front tires) don’t even work.”

The team used the break to fix some of the damage in the right-rear area of the car, make a round of adjustments, change four tires and add fuel.

As the field made laps under caution preparing to start the final stage, Briscoe reported a vibration on the No. 14 DEKALB Ford. The team elected to pit for four tires before the start of the stage, placing Briscoe in 28th for the restart.

Caution was displayed on lap 173 with Briscoe in 28th place.

Racing resumed on lap 178 with Briscoe running in 23rd.

As the race continued so too did the handling issues on the No. 14. Briscoe was in 23rd place at lap 210 when he updated the team that the balance had improved slightly but as the run continued the tight-handling issue at the exits of the turns resurfaced.

Caution waved for a single-car accident on lap 217. Briscoe was scored in 22nd place. The team elected to stay out during the caution and pick up one of the laps they lost. This placed Briscoe in 21st for the restart on lap 222.

The gamble paid off one lap later when caution waved on lap 223 for an accident. The team made a trip to pit road for service before Briscoe lined up 20th for the restart on lap 228.

As the laps wound down in the 400-mile race, Briscoe was able to pick up one more position to finish the day in 19th place.

The next event on the NASCAR Cup Series schedule is the Xfinity 500 on Sunday, Oct. 31 at Martinsville (Va.) Speedway. It is the penultimate race of the 10-race playoffs and the final race in the Round of 8. It starts at 2 p.m. EDT with live coverage provided by NBC and SiriusXM NASCAR Radio.