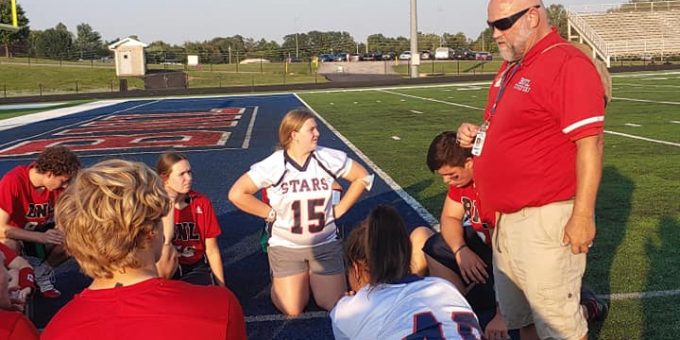 BEDFORD – Athletics in High School have always been considered tough and fast paced, causing some students to feel left out from all of the fun.

Bedford North Lawrence High School, has had the answer to that problem for the past four seasons with their Unified Flag Football Program.

“Anyone can come out and play, there is a great opportunity with this sport for all to get involved. One huge benefit to playing Unified Flag Football, is that size doesn’t really matter,” said Head Coach Mike Branam. “The smaller kids can be just as tough as the bigger kids on the field.”

The team is non-exclusive, allowing students of all ages, gender and ability to come out and play.

“This program really gives the opportunity for all to excel in sports. We had two senior girls on this team who really helped carry the load,” Branam said. “One other difference with this league is it also includes a stipulation to include three players within the Individualized Education Programs (IEP’s) at the school.”

This years team went undefeated in the regular season, with a 4-0 record and winning their fourth straight Sectional Title, unfortunately ending their season, by losing to Franklin Central in the first round of Regionals 38-18.

Coach Branam is confident that this group can make bigger strides in the upcoming seasons.

“There is a whole lot of opportunity to grow and learn from with this team. The expectation will be to go further next season, and this group is capable of making it to the state championship game and winning if they are willing to put in the work and work hard for it,” Branam said. “Half of the team this year were freshman, who will be coming out again next year.”

Although it may be considered an easier sport than contact football, Coach Branam thinks otherwise.

“The game can be more difficult than contact football, because of the overwhelming need of hand-eye coordination,” Branam said. “Anyone can run in and make contact or tackle an opponent, it’s harder to have to reach out and grab a nylon flag that is moving in the wind and with the player.”

Even though the season didn’t end as some would have hoped, Coach Branam said he is in this position for another reason.

“Watching the kids gain faith in themselves and watching them become champions. If you aren’t in coaching to watch kids grow, you’re in it for the wrong reason.”