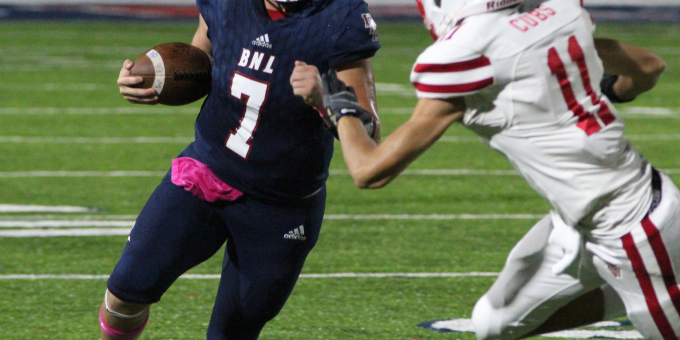 BEDFORD – Everything was perfect, scripted so precisely that it rivaled sheer fantasy, celebrated with pride and punctuated with a dominating victory. Senior Night rarely matches expectation. Hey, Bedford North Lawrence had lost three of those in a row. This one exceeded even the wildest imagination.

Coming off its biggest disappointment, BNL displayed its best side, smashing Madison 41-6 while honoring the 17-man senior class on Friday night. Everyone had a hand in this one, the wealth of glory was spread multiple ways. Memphis Louden will get a lot of credit for his four touchdown passes, BNL’s secondary will be praised for its shutout work on one of the state’s best receivers. Those are the main highlights, but there were so many levels of excellence.

Where to start? How about the defense, which surrendered single-digit points for only the second time in the last 28 games. Madison wideout Colin Yancey had to feel like a political figure with a Secret Service escort, double-teamed with coverage every step, and quarterback Kaden Oliver spent most of the night running away from extreme pressure while throwing two interceptions.

How about the offense, with Louden connecting with four different targets for the scores, with Zane Anderson lumbering through gaps up front, with Brye Lewis scoring a touchdown. Louden was 14 of 23 for 156 yards, and his receivers made some outstanding moves to get open and find the end zone.

“I’m happy we won, but I’m more excited this group of senior got to have the night they deserved,” BNL coach Derrick Barker said. “They’ve worked so hard. I wanted a night they could all have some fun.”

The Cubs (3-5) didn’t have much fun nor enjoy it like BNL did. Madison was limited to minus-27 rushing yards, in part because of three high snaps in the shotgun formation that sent Oliver scrambling to recover the loose balls. Yancey, who ranked third in the state in receiving yards and total catches, caught only 3 for 44 yards. Oliver was sacked four times and purposely threw passes into the turf to avoid others.

So credit goes to Lewis, Colton Staggs, Lyric Baker, Jesse Brock and Trace Rynders. They were the blankets that covered Yancey. After giving up big plays in almost every game this season, they were almost perfect back there.

“We had to change our defensive game plan, specifically cater it to No.5,” Barker said. “He’s such a good player. Those five guys did an unbelievable job keeping him in check. We knew they had other good players, but we felt like we could cover him and make someone else beat us.

“We challenged the back-end guys, and we challenged the front guys to see if we could get 15 or 20 quarterback hits. We were close, at least that many hurries. They did a tremendous job. He couldn’t settle in and get the ball out there.”

Credit goes to the offense, which only stopped itself (two turnovers and blocked field goal). Louden connected with Dylan Nikirk for a 37-yard touchdown in the first quarter, hit a wide-open Ryker Hughes in the left corner of the end zone from 11 yards midway through the second, and closed the first half with 32-yard strike to Grant Todd as BNL took a 21-6 lead at intermission.

BNL pulled away in the third quarter. Brock’s fifth interception of the season, followed by a 40-yard return, set up Anderson’s 2-yard touchdown run. Brock followed that with a blocked punt to set up Lewis, who slashed home from 6 yards for a 34-6 lead.

And the final drive of note triggered the running clock. The Stars marched 72 yards in 14 plays, with Louden finding Grant Dalton from 22 yards (on fourth down) for the 35-point margin (that prompts the mercy rule).

Nobody had amazing individual numbers, but that was the beauty of the attack. Dalton, who just got rid of the cast on his left hand, had the most catches (four), Nikirk had the most yards (56) and Anderson did the dirtiest work (67 rushing yards).

“That’s what we want,” Barker said. “That’s the design of our offense. Memphis does such a good job of finding the open guy and extending the play. He stepped up and avoided pressure. We want to be diverse like that.”

Madison’s only score came early in the second quarter, when a pass interference penalty (one of 13 flags in the first half, with the yellow tossed about by the officiating crew contrasting with the pink worn by the student section to signify cancer awareness) kept a drive alive and Oliver hit Drew Hayden over the middle from 8 yards. That cut BNL’s lead to 7-6 at the time. The rest of the night was a Starry, starry one.

“It was a great experience,” Todd said. “We all had our own little role. Brye made some huge plays, Jesse made some great plays. I’ve grown up with these guys for years. We’ve been best friends since we were 6-7 years old. It’s great to be a part of a night like this. It comes faster than you expect. It was a great night.”

Brock had the standout individual moments. His theft was a perfect read of the quarterback as he broke from his assignment and drifted back for the ball. Perhaps opposing offenses will throw in another direction. His blocked punt was a spur-of-the-moment decision to charge off the edge and get a hand out. His picks are no accident.

“Just keying on the receivers and the quarterbacks,” Brock explained. “Just keep my eyes on the quarterback the whole time. It’s a great time. I love it. It was good to get back on track.”

Louden’s touchdown passes were equal parts his throws and receiver adjustments. Nikirk’s was a stumbling snag, Todd broke off a route with Louden in trouble, found an open area and used a great block from Hughes to win the footrace.

“He was scrambling, and I wasn’t even close to the route I was supposed to be on,” Todd said. “Ryker gave me a great block and I was fortunate to get up the sideline.”

BNL (4-4) will now await the IHSAA announcement of the sectional draw on Sunday. The Stars missed last year’s postseason (virus, of course) and can’t wait for their return.

“We feel like we had unfinished business,” Todd said. “We’re playing some good ball right now, and coming off a win like this.”

BNL will conclude the regular season at Columbus East next week.