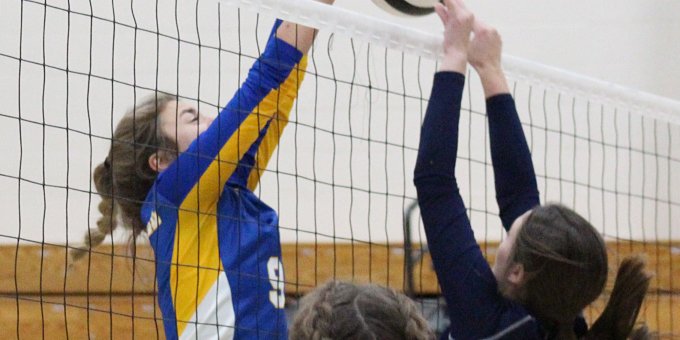 MITCHELL – If one point can capture the entire essence of a match, Mitchell’s second-set clincher was perfect. Freshman setter Jayden Allen made a spectacular lunge toward the stands to save an errant pass and lofted it toward the net. Senior hitter Maddie Robertson slammed it down. Right place, right time.

The Bluejackets made all the right moves, thumping Bedford North Lawrence into submission with a three-set sweep in the season opener on Tuesday. Mitchell pounced to early leads in the first and last sets, and the Stars were always slogging in catch-up mode as the Jackets powered to a 25-15, 25-22, 25-20 triumph.

Robertson, a 6-foot-2 power up front, hammered 14 kills while Allen handed out 32 assists, propelling Mitchell to its third win in the county rivalry since former BNL mentor Scott Saunders’ took over the Bluejackets four years ago. That was sweet.

Mitchell (1-0) was never in jeopardy. The Jackets jumped to a 5-0 lead and cruised in the opening set, surged late to take the second, and soared to a fast 7-2 advantage in the finale. Credit the rookie with a rousing debut in charge of a higher-geared attack, credit Robertson and outside hitters Jordyn Sarver and Jocelyn Allen (11 kills each) for contributing more offense than the Stars could handle.

“I felt like we had more offense, but I knew they had good defense,” Saunders said. “They were going to dig some balls and cause us some trouble. But we adjusted really well. We started moving the ball around.

“We put a lot of pressure on Jayden. We’ve tried to speed our offense up, and that’s a lot on her. I knew there would be some hiccups. For a freshman, she was really good, in the first big home game against the county school. Maddie was awfully big. And we had good balance. We won the serve-pass game and matched them dig for dig. It was a good win against a solid team, something to build on and move forward.”

BNL (0-1) could never create momentum. The Stars never led the opening set, fought even until latter stages of the second. Mitchell extended to a 23-18 lead, but BNL’s best moments (Carlee Kern’s kill, Harley Tanksley’s ace and Camryn Anderson’s putdown) trimmed the Mitchell lead to 24-22 and sparked some rally murmurs. When BNL’s Annie Waggoner smoked a hard serve and the pass went careening sideways, trouble was sensed.

Allen silenced that noise with her dash toward the seats and a perfectly lobbed set, over her head without eyeing the target, to Robertson for the soul-crushing smackdown at the net. When Mitchell opened the third with five straight points to the 7-2 advantage, BNL was done.

“We came out a little nervous, but we progressively pulled it together and got better each set,” BNL coach Gabrielle Arthur said. “It just wasn’t enough. It’s hard to build momentum when you’re down. That’s tough.”

The Stars struggled for a consistent attack. Kern had 5 kills and Maddy Bennett added 3, while Waggoner totaled 11 assists, 3 aces and 9 digs. Kern totaled 9 digs and Bennett added 8. BNL’s defensive numbers were far better than the offense.

“Maddy was high energy and people feed off her,” Arthur said. “We just lacked that a little bit. We feed off the stands and the excitement. I was disappointed in the energy level. But it’s Game 1 and we have a lot more games this season. Yes, it’s Mitchell and it stinks (to lose), but we have a lot of games moving forward and we know what we need to work on. We’re lacking team unity. We’re playing as individuals rather than playing for each other.”

Mitchell also had the Stars scouted perfectly. Waggoner makes a habit of scoring points with her tips and pushes, catching the defense on its heels. The Jackets were not flat footed.

“She beat us last year,” Saunders said. “Her and Haley (Deckard) tipped us to death. They were not going to do that this year, I didn’t care if we had to move six people up there and give up the whole back line. We were really cognizant of what Annie was doing.”

Mitchell will visit Paoli for its PLAC debut on Thursday. BNL will play its home opener against Brown County on Thursday.