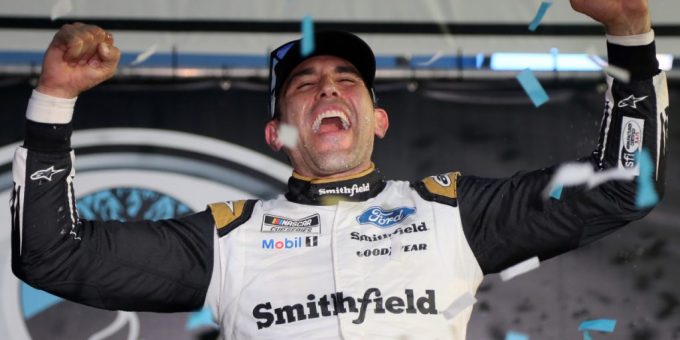 Aric Almirola of Stewart-Haas Racing (Ford) was the winner.

Aric Almirola won the Foxwoods Resort Casino 301 to score his first win of the season, the third of his career, and his second since joining SHR in 2018. His margin over second-place Christopher Bell was .697 of a second.

The race was reduced eight laps short of its scheduled 301-lap distance due to darkness.

Just eight laps into the Foxwoods Resort Casino 301, the yellow caution flag was shown as the leaders spun going into turn one due to wet track conditions. With rain falling, the race was placed under red flag conditions for an hour and 41 minutes.

After several laps under yellow, the event returned to green on lap 24 with Briscoe lined up 15th.

The No. 14 HighPoint.com team made their first pit stop of the race under yellow on lap 26. Briscoe said the car felt like it was on top of the track and needed help on the corner exit. He was given four tires, fuel, and adjustments, and lined up 29th for the lap-39 restart.

Briscoe drove up to the 22nd position, but as the end of the first stage approached, he struggled on corner entry, causing the HighPoint.com Ford to fall back to 24th.

At the stage break, the team pitted for four tires, fuel, and additional adjustments to help Briscoe with corner entry.

Following the stage break, Briscoe lined up 21st for the beginning of Stage 2. However, on the pace laps, the No. 14 HighPoint.com Mustang shut off. Briscoe pulled to the apron of turns three and four as the field approached the green on lap 82, where he attempted to refire his car. He was able to get going before the leaders lapped him, though he was scored in the 29th position, nearly 20 seconds behind the leader.

Briscoe was lapped on lap 108. But he was able to hang on to his spot as the first car one lap down and was awarded his lap back when the caution flag waved on lap 129.

Under caution, the HighPoint.com driver pitted for tires, fuel, and adjustments to help him roll the center better as his entry had improved from previous adjustments.

Briscoe restarted 21st but got stuck in the bottom lane and fell back to 25th. He worked his way back up to the 21st position by the end of the second stage.

The HighPoint.com driver reported that he was having trouble across the center of the corner, so when the team pitted on lap 189 Briscoe was given fresh tires, fuel, and adjustments to help with the front turn in the center.

The HighPoint.com driver began the final stage in 19th but quickly dropped back to 27th, reporting that his Ford Mustang was plowing. As the stage went on he radioed that the tires were chattering in the center of the turn. But he was slowly able to work his way back into the 24th position.

When the leaders began making scheduled green-flag pit stops on lap 246, the No. 14 team elected to stay on track to try to catch a caution. Briscoe ran as high as fifth before cars with newer tires began to pass him.

Briscoe was called to pit road on lap 274 for his scheduled green-flag pit stop, receiving right-side tires and fuel. He rejoined the field in the 29th spot, two laps down.

Briscoe picked up two positions before NASCAR announced on lap 283 that the race would end within 10 laps. He crossed the line 27th when the checkered flag waved.

Briscoe was the highest finishing NASCAR Cup Series rookie for the 18th time this season.

There were six caution periods for a total of 47 laps.

Only 15 of the 37 drivers in the Foxwoods Resort Casino 301 finished on the lead lap.

Chase Briscoe, driver of the No. 14 HighPoint.com Ford Mustang for Stewart-Haas Racing:

“We had a really tough time getting our balance where we needed it all day. We’d make improvements on entry, but it was never really where I needed it to be to make up any ground. Going a lap down didn’t help, but we were able to get that back pretty quick. Playing the strategy game at the end and hoping for a caution didn’t quite go in our favor, so I’m looking forward to the break. It’ll give us a chance to regroup and come back ready for some road-course racing in a few weeks.”

The NASCAR Cup Series goes on a two-week summer break as broadcast partner NBC covers the Summer Olympics in Tokyo. It returns to action on Aug. 8 with the Go Bowling at The Glen road-course race at Watkins Glen (N.Y.) International. The event starts at 3 p.m. EDT with live coverage provided by NBCSN and SiriusXM NASCAR Radio.