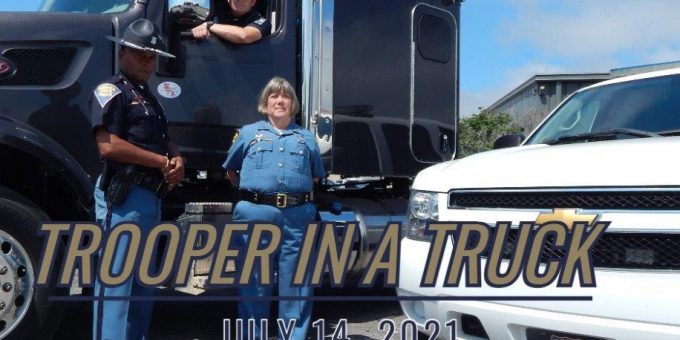 INDIANAPOLIS – The Indiana State Police Commercial Motor Vehicle Enforcement Division (CVED) along with the Lowell, Toll Road, Indianapolis, and Sellersburg Posts will be conducting a Trooper-in-a-Truck enforcement patrol on July 14, 2021.  In the Pendleton District, CVED is teaming up with the ISP Aviation Section and district troopers to focus on the enforcement of unsafe and aggressive driving behaviors around commercial vehicles.

The Trooper-in-a-Truck initiative places a trooper in a commercial motor vehicle operated by a highly trained and qualified CDL driver.  The trooper will observe for violations as the CMV driver drives the selected route.  While no dangerous traffic violation will be ignored, the trooper-in-a-truck will be observing primarily for violations of Indiana’s “hand-free” law.  Despite the fact the most recent version of this law, prohibiting the use of hand-held communication devices in all but emergency situations, has been in effect for over a year, distracted driving continues to be a major problem on Indiana’s roadways.

“The Indiana Motor Truck Association and its member carriers are partnering with ISP in this endeavor by providing the trucks and drivers”, said Major Jon Smithers, ISP CVED Commander.  “The IMTA and CVED have long had a strong and mutually supportive relationship as improving highway safety is a shared goal.  The IMTA and its members have long been leading advocates for the implementation and enforcement of a strong and effective hands-free law and are passionate about educating our citizens about the dangers of distracted driving”, Smithers continued.

Crashes involving large trucks are often high profile and may result in tragic consequences.  While the statistics vary some, studies show that in crashes involving large trucks, it is more often the case in which it is the fault of the other vehicle.  A large, heavy truck is far less maneuverable and takes substantially more distance to stop than a smaller vehicle.  Unsafe, aggressive driving behaviors near a truck may lead to disastrous results.

CVED has conducted Trooper-in-a-Truck type patrols for the last few years, except in 2020.  Most have been small events in the vicinity of Indianapolis.  This year’s event will be much larger and, for the first time, will take place simultaneously in several areas across the state.