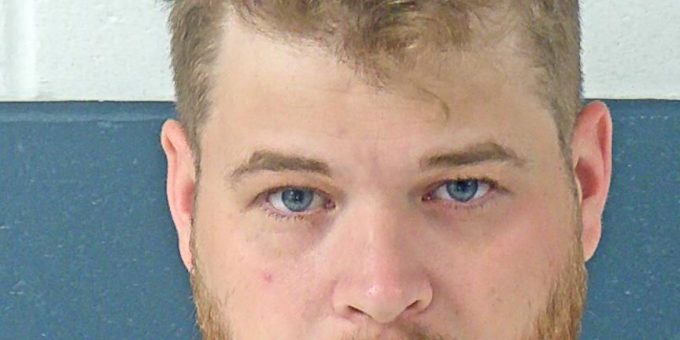 MITCHELL – A Mitchell man was arrested Tuesday after a woman came to the Mitchell Police Department at 5:11 a.m. to report a battery.

Officers say the woman was distraught. She told an officer the weapon used was on the floorboard of her vehicle.

The woman told officers she had left her apartment and walked out to her vehicle around 4:15 a.m. and that is when she noticed a person approach the driver’s door through her backup camera.

That person was 32-year-old Seth Blackwell, who was the woman’s ex-boyfriend. Blackwell then opened the door and said “if you don’t cooperate, I will stab you”. The woman told police Blackwell was armed with the large scissors. She said he held the scissors to her chest several times threatening her. She stated Blackwell then grabbed her arm and told her to get into the passenger seat and demanded they go on a drive. The woman resisted and refused to let Blackwell into the vehicle. He then began yelling at her and grabbed her by the throat, choking her.

Blackwell continued to attempt to enter the vehicle and was able to get into the backseat then moved to the front passenger seat of the woman’s vehicle.

Blackwell wanted to talk about the couple’s break up that occurred in October of 2020. He then struck the woman in the face with his fist when he realized the woman was still wearing her engagement ring.

The woman was finally able to talk Blackwell out of her vehicle. She then pulled frantically out of the apartment complex striking another vehicle. Blackwell followed her and that is when she dialed 911 and rushed to the Mitchell Police Department.

The woman told police she has an active protective order and no-trespass order against Blackwell.

Police found Blackwell at approximately 5:30 p.m.at a home on Spice Valley Road where he was arrested on charges of attempted kidnapping, intimidation, strangulation, domestic battery, domestic battery in violation of a no-contact order, invasion of privacy, criminal trespass, and unauthorized entry of a motor vehicle.