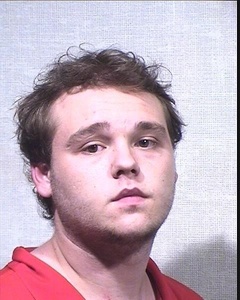 BROWNSTOWN – An 18-year-old Vallonia man was arrested following a pursuit with police Friday afternoon. The pursuit ended when Payton Prewitt, of Vallonia, crashed his motorcycle in a cornfield in Jackson County.

Prewitt faces charges of possession of meth, two counts of resisting arrest, and criminal mischief involving damage to property of an agricultural operation.

According to a news release from Brownstown Police Chief Tom Hanner, the pursuit started when a Brownstown officer attempted to stop Prewitt, who was on a motorcycle for a traffic violation at State Road 135 and County Road 100 South.

Prewitt refused to stop leading to a pursuit that traveled south on State Road 135 and ended when Prewitt failed to make a turn and crashed into the cornfield where he was arrested.

Assisting in the pursuit were Brownstown Officer Ryan Cherry and Assistant Chief Joe Kelly along with Jackson County Sgt. Ben Rudolph who assisted during the pursuit and arrest.