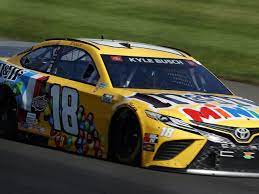 OAK LAKE, Pa. – Kyle Busch won the Explore the Pocono Mountains 350 to score his 59th career NASCAR Cup Series victory, his second of the season, and his fourth at Pocono. His margin over second-place Kyle Larson was 8.654 seconds.

There were four caution periods for a total of 15 laps.

Twenty-two of the 38 drivers in the Explore the Pocono Mountains 350 finished on the lead lap.

There were four caution periods for a total of 15 laps.

Twenty-two of the 38 drivers in the Explore the Pocono Mountains 350 finished on the lead lap.

“The front end of the car was just way too tight at the beginning,” said Briscoe. “We finally got it to where the balance was pretty good and it seemed like our pit strategy was going well, but we were just a little too short on fuel to run hard at the end. I’m really excited to go to Road America. It’s one of my favorite tracks, so hopefully, we’ll be able to put on a show there and come out with a good finish.”

Denny Hamlin remains the championship leader after Pocono with a four-point advantage over second-place Larson.

The next event on the NASCAR Cup Series schedule is the Jockey Made in America 250 July 4 at Road America in Elkhart Lake, Wisconsin. The race starts at 2:30 p.m. EDT with live coverage provided by NBC and SiriusXM NASCAR Radio.