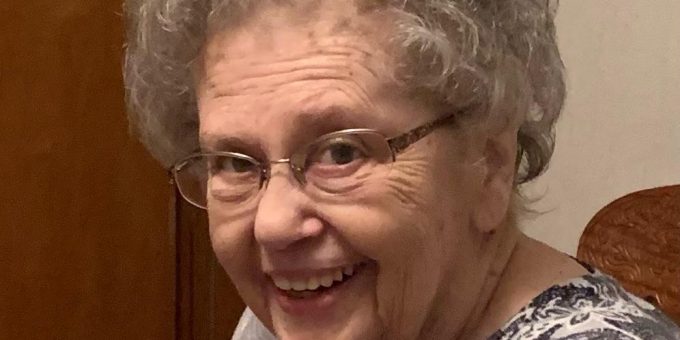 She was born August 13, 1936, to David and Mildred (Mathews) Williams, who preceded her in death. She was a graduate of the Shawswick High School class of 1954. On September 4, 1955, she married John Kenneth Flinn, and he survives.

The daughter, granddaughter, and great-granddaughter of preachers, she was baptized into the church of Christ at Pinhook in 1948 and was a member for 73 years, teaching multiple Bible study classes for women and children and serving as an unimpeachable example of faithfulness unto death.

Always one to keep busy, in high school she started working at Kresge’s Department Store, and after
graduation took a position working with local attorney Clarence J. Donovan. She later worked for Sallee
and Company Accountants (now Turpen and Deckard), officially retiring around 2001 but staying on to
help out during tax season for several years beyond that. Her favorite job was being Mom and Mamaw,
cooking and baking pies for her ever-growing family.

In addition to her beloved Johnnie, she is survived by four children: Betsy Rose (Lee) Wildman of Columbus; David Alan (Ellen) of Bedford; Bradley Richard (Dana) of Pinhook; and John Wesley (Amanda)of Morris, MN – six grandchildren: Derek (Allison) Flinn; Nick (Julia) Wildman; Amanda (Ryan) Smith; Lauren Flinn; Carrie Flinn; and Brandon Flinn – and five great-grandchildren: Rachel, Sam, Emma, and Trinley Wildman; and Carolina Smith. One sister, Patsy Gaines of Cocoa, FL, and one brother, Lowell (Judy) Williams of Pinhook, survive as well, as do several nieces and nephews. We cannot fail to mention Tucker the cat, who has brought so much joy to her last years.

There will be a visitation at the Ferguson-Lee Chapel of Thorne-George Family Funeral Homes in Bedford
on Monday, June 21, 2021, from 5:00 p.m. until 8:00 p.m. Services will be at the funeral home on Tuesday, June 22, 2021, at 11:00 a.m. with Bro. Lee Wildman and Bro. Paul Guthrie presiding. Burial will follow in Pinhook Cemetery, where she will rest less than one mile from where she was born.