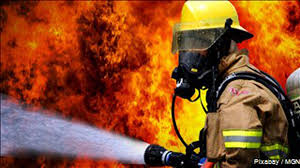 MITCHELL – Marion and Mitchell Volunteer Fire Departments responded Sunday to the 700 block of Earl Road after a report of a fire at 3:53 a.m.

Firefighters found two pull behind RVs being used as a fixed structure and both were engulfed in flames.

Firefighters used attack lines to extinguish the fire and search for any fire victims.

“The initial 911 caller could not advise if there was anybody in the structure or not. While the fire was extinguished firefighters checked the remains of the RVs and surrounding area to search for victims. None were found. There was no electricity or utilities to the RV’s and the fire remains under investigation at this time,” said Paul Gillespie, Fire Chief Marion Township Volunteer Fire Department.

The fire remains under investigation and the Indiana State Fire Marshal’s Office has been contacted.