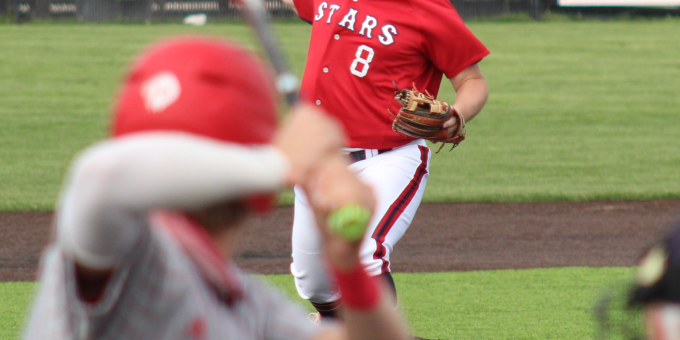 Ace hurler Max McEwen fired a one-hitter as the Red Devils (17-12) slammed the mistake-prone Stars 11-0 on Saturday night and advanced to face Floyd Central in the championship game on Monday. The Highlanders reached the final with a tense 1-0 triumph over New Albany in the first semifinal.

McEwen, who was brilliant the first time he faced BNL this season, was untouchable once again. He fanned 16 and issued one walk (to Aden Pemberton with two outs in the third inning) before allowing a soft double by Evan Waggoner, a pop up that fell over third base in the bottom of the seventh. In the first battle with the Stars on April 23, McEwen gave up a lead-off bunt single and then retired 21 straight batters. He was equally sensational in the rematch.

“I thought we had a good week of practice and talked about the approach, but he threw the ball well,” BNL coach Jeff Callahan said. “He dominated us.”

Jeffersonville did all its damage early, scoring five runs in the second inning and four more in the third.

Chate Amick started the Jeff second with a single, and Josh Weiser followed with a bunt single. After BNL pitcher Braydon Brown was called for a bulk to advance the runners, Alex Kelley stroked a RBI single, and Hunter West lofted a sacrifice fly for a 2-0 lead.

Grant Paradowski kept the rally going with a walk, and a second Brown balk moved both runners into scoring position. They can home on Brett Denby’s two-run single, and McEwen added a run-scoring single before BNL freshman Ryker Hughes came on in relief to get the third out.

The Devils roughed up Hughes and the Stars in the third. Two walks and a Paradowski single loaded the bases, and lead-off batter Kannon Stull drew another walk to force in a run. Cole Karr took the mound in relief, and Denby’s fly ball to left was misplayed as all three runners scored for a 9-0 advantage.

Jeffersonville finished with two runs in the seventh on Paradowski’s two-run single.

BNL had three errors and allowed the first batter to reach in five of the seven innings.