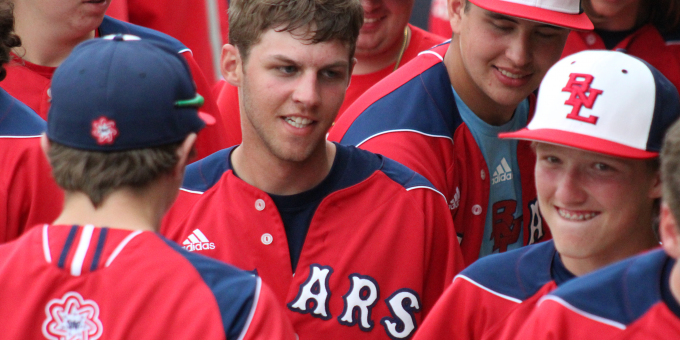 BEDFORD – Jacob Foster is the ultimate poster kid for Senior Night. Given a chance for his one shining moment, after a limited amount of appearances and opportunities most of the season, Foster made a lifetime memory. Nobody deserved it more.

Foster, making his first start, drove in the go-ahead run in the second inning, collected two hits and sparked Bedford North Lawrence to a 6-1 victory over Evansville Christian on Wednesday evening. Whitt Callahan had three hits, including two doubles, Cole Karr blasted at home run and earned the win on the mound, and Colton Brown had two hits as the upperclassmen celebrated in style.

BNL honored nine seniors, but none will remember it more than Foster. This kid was cut as a sophomore, worked as a manager, got reinstated to the junior varsity when BNL needed a roster boost that season, and just quietly persevered. Good things definitely came for the waiting Fisher.

The Stars were deadlocked at 1-1 in the second, with two on and two out, when Foster singled to center to chase home Konley Woodward for the lead. After the runners advanced on a wild pitch, Brown banged a single to center for a 4-1 cushion. Foster would later add a single in the fourth.

For the season, he now has 5 hits in 8 official at-bats. But the others paled in comparison to the single that gave his team the lead. He could barely contain his smile at first base.

Excited? “A little bit,” he admitted.

“It was nice. I’m really thankful for the Senior Night, it meant a lot to me and my family.”

The pregame ceremony, with parents as escorts, was a reward for the effort he made to keep a spot on the roster, even if it was on the bench.

“It was really hard,” Foster said, recalling the day he was cut during tryouts. “I wasn’t ready to be done playing baseball. I decided to work harder.”

“There’s a kid who stuck it out,” BNL coach Jeff Callahan said. “He’s done a good job this year, he shows up every day and has done what we’ve asked him to do. It’s nice for all the seniors, but especially for a kid like Jacob. He’s just a good young man.”

Karr got BNL on the board in the first with a towering blast to left, his third homer of the year. After BNL powered to the 4-1 lead, the Stars added two more in the fifth. Woodward cranked a run-scoring triple to right and came up smiling at third, and Aden Pemberton followed with a sacrifice fly.

“It was a good win for the seniors,” Callahan said. “It was good to see some of them step up and get some big hits. Cole pitched well early, Evan (Waggoner) threw a couple of kids out, so every senior contributed to the win. That’s nice to see. We had some good hits. We made a good adjustment.”

Karr (4-3) pitched the first four innings and scattered six hits. He gave up a run in the first on Connor Sharp’s hard double to left and Brandon Juarez’s rocket to center for the RBI. Ryker Hughes pitched three innings in relief and was brilliant, striking out 6.

Hunter Lindsey had two hits for the Eagles (11-8).

BNL (17-9) is starting its head-first slide toward the postseason. The Stars will host the Orval Huffman Invitational on Saturday, facing Silver Creek in the opener (of the four-team, two-game event) at 10 a.m. They will wrap the regular season against Loogootee on Monday.

“Hopefully we can use these next three games as a springboard,” Callahan said. “Defensively and pitching, we’ve played well, even in times we’ve lost some games. Hopefully the hits will come.”