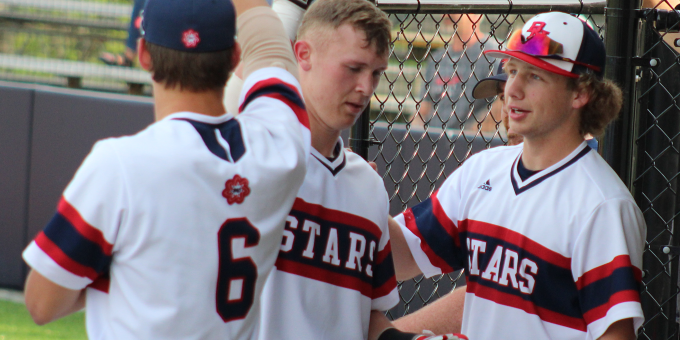 BEDFORD – Jacob Vogel, looming large on the pitcher’s mound at 6-foot-8, is a tall and commanding presence. He made short work of Bedford North Lawrence.

Jennings County’s ace hurler was masterful, striking out 10 during a complete-game performance as the Panthers shut down the Stars 1-0 on Tuesday afternoon. Keegan Manowitz drove in the only run with a safety-squeeze bunt, and Vogel did the rest while scattering four hits and escaping BNL’s only serious threat in the fourth inning.

Evan Waggoner was the only offensive force for BNL. The senior catcher went 3-for-3, including a ground-rule double that hopped over the fence in left. Everyone else went quietly too often.

Vogel, now 7-1 (with a lone loss to Madison), displayed his full arsenal. His most effective weapon was strike one. The Stars took more defensive swings than vicious hacks.

“He attacks kids,” Jennings coach Trent Hardisty said. “He’s not afraid, and he has command of all his pitches. He’s probably around 70 percent first-pitch strikes.”

“We knew what we were going to face,” BNL coach Jeff Callahan said. “Our sectional has some dudes in it. He’s in there with (New Albany’s Tucker) Biven, (Jeffersonville’s Max) McEwen and those guys. We had a couple of opportunities and just didn’t get the key hit in the right situation. That’s what you have to do against good pitching.”

Vogel’s splendid work overshadowed BNL’s duo of Braydon Brown (one hit in three innings, limited duty as BNL starts lining up its pitching for the postseason) and Kline Woodward (who fell to 5-1, despite giving up only 2 hits in four innings on relief). The only difference? The Panthers got the clutch hit, and Vogel had that as well.

With one out in the fourth, Lane Zohrlaut was hit by a Woodward pitch. With executional excellence, Jennings (13-9) implemented a perfect hit-and-run. With Zohrlaut on the move, Vogel ripped a liner to deep left-center as Zohrlaut scampered to third. On the next pitch, Manowitz dropped down a perfect bunt that allowed Zohrlaut to score.

“I’m not a suicide person, more of a safety squeeze person,” Hardisty said. “The kids executed, and there you go – we get a run. If we’re struggling with the bats a little bit, we will force the issue with a little bit of small ball.”

Small ball produced a huge run. And that was the extent of the offense.

Waggoner, who bumped his battling average to .373, set up BNL’s best chance with a lead-off single in the fourth. Grant Dalton drew a walk (the only one Vogel allowed) and Konley Woodward bunted both runners up a base. Vogel got Kline Woodward to ground out to squelch the rally.

Aden Pemberton had the only other hit for the Stars, a single to right field in the third. BNL stranded five runners in scoring position.

“Evan hit the ball hard, hit it well,” Callahan said. “He’s kind of locked it in here recently. Aden has a nice hit. The other guys didn’t make adjustments. We swung at balls out of the zone at times that hurt, and other times we were trying to do too much. That’s what players will do, thinking they have to do something to spark us.”

BNL (16-9) will host Evansville Christian on Wednesday at 7 p.m. and celebrate Senior Night during pregame festivities.