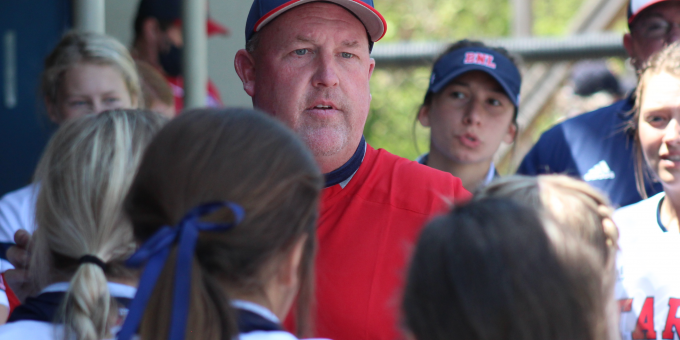 BLOOMINGTON – An ugly victory is certainly worth more than a beautiful loss. Bedford North Lawrence proved that.

Limited to six hits, the No.7 Stars took advantage of Bloomington South’s flaws for a 10-8 victory over the Panthers on Monday afternoon. Braxton McCauley drove in four runs and Maddy Bennett slugged a pinch-hit home run to highlight the offense, although the Panthers (7-12) definitely aided their own demise.

South was guilty of four errors, while South pitchers combined to walk four, hit three batters and allow five wild pitches. BNL (23-4) scored four unearned runs, and even with all the gifts, the Stars still had to fight off South’s rally in the bottom of the seventh to escape.

The Panthers collected 12 hits and the Stars were guilty of three errors. Not exactly a Norman Rockwell painting, but BNL will not give back the road triumph. Beauty is still in the eyes of the beholders.

“It was one of those games we were happy to get the W,” BNL coach Brad Gilbert said. “It was a grind. I’m proud of our effort to stay focused.”

BNL scored in the first without benefit of a hit as Sarah Stone and Annie Waggoner reached on errors, Brynlea Bennett was hit by a pitch, and McCauley lofted a sacrifice fly. The Stars added a run in the second on singles by Carlee Kern and Aliza Jewell, and Brylee Blackwell’s squeeze bunt.

South went on the attack in the third with Kayli Reed’s triple and Jessica Young’s RBI single, then took a 5-2 advantage with a four-run fourth. With two outs, Marin Jacobs cracked a RBI single, Reed singled, and Izzy Hamilton ripped a two-run triple to center.

The Stars answered with four runs in the fifth to retake the lead, and did all the work with only one hit. After two walks, Lauryn Anderson got aboard with a bunt single to load the bases. Waggoner and Brynlea Bennett were hit by pitches to force in runs, Anderson scored on a wild pitch and McCauley reached on an error as another run crossed.

BNL added four more in the sixth. Maddy Bennett slugged her lead-off homer to left to start the frame. Carsyn Alvey walked, and pinch-runner McKaylin Turner stole second before scoring on back-to-back wild pitches. Stone kept the rally going when her grounder was misplayed. After Waggoner walked, McCauley blasted a two-run double for a 10-5 lead.

“Maddy put a good swing on it,” Gilbert said. “The ball carried out and I was excited to see that. Coming off the bench is really tough. I’m just thrilled for her, she was ready to go when her number was called.”

South didn’t go quietly. Three singles (with Keely Hubbard driving in a run), a RBI ground out (by Tiffany Sowder) and BNL’s third error got the Panthers within 10-8. With two runners on, Jewell struck out Hamilton to end the threat.

Reed, Hubbard, Jo Hanson and Lexie McGlothlin all had two hits for South. BNL’s Annie Waggoner earned the win in the circle, working 5 1/3 innings and fanning 8 while giving up five earned runs. Kern had two hits for the Stars.

“It was a tough night to pitch,” Gilbert said. “We had to be really accurate at times. It was a struggle calling pitches.

“We have to do better job of figuring their pitching out a little quicker. It took a long time. We popped up a lot, but we took advantage of the stuff they gave us.”