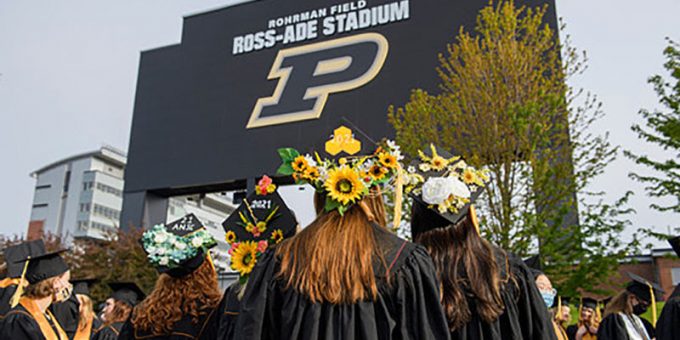 WEST LAFAYETTE – Purdue University celebrated the Class of 2021 with a special in-person ceremony on Saturday (May 15) at Ross-Ade Stadium.

In his keynote address to graduates, Purdue President Mitch Daniels talked about Boilermakers’ place as bold leaders and how their experiences at Purdue, particularly in navigating the pandemic as they completed their education, prepared them.

The Graduate School will have its Ph.D. ceremony at 10 a.m. Sunday (May 16) at Edward C. Elliott Hall of Music for 198 doctoral candidates. Purdue Provost Jay Akridge will speak at that ceremony.

Calhoun received his honorary from the College of Health and Human Sciences. He earned a Bachelor of Science degree in technology from Purdue in 1987. He serves as chair of the Student Life Advisory Council at Purdue.