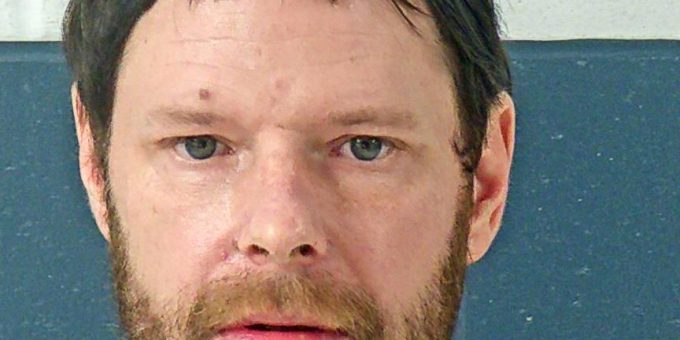 BEDFORD – A Bedford man was arrested on a charge of domestic battery after Lawrence County Sheriff’s Department deputies were called to a home in the 3500 block of Pinhook Road.

The caller 43-year-old Stephen Pruett reported his elderly mother had sprayed him in the eyes with wasp spray.

When police arrived they found Pruett on the front porch and the elderly mother inside.

The woman told police Pruett had been drinking alcoholic beverages since Thursday and had not stopped.

She told police she had taken Pruett’s handgun and hid it in the residence because he was intoxicated and had previously threatened to shoot her with the handgun.

A Lawrence County deputy had been to the home approximately an hour prior because Pruett had reported the gun stolen. Pruett was told since he lived with his mother and was intoxicated it was not a crime for his mother to take the weapon for safe keeping. Pruett was upset and told that officer he was going to tear the house apart looking for the weapon.

After the officer left, Pruett allegedly forced his way into his mother’s bedroom in an attempt to look for the handgun.

He allegedly grabbed his elderly mother by the arm and attempted to force her out of the bedroom. The act left bruises on the her arm.

Officers could tell the woman was afraid of Pruett and was reluctant to sign a battery affidavit.

The elderly woman told police she had not sprayed Pruett with wasp spray and Pruett showed no signs that wasp spray had been sprayed in his face.

While speaking to police, Pruett opened a can of Keystone Light Beer. During the conversation, Pruett was told to stay out of his mothers’s room. He then became belligerent with officers and stated he would continue to search for his gun.

Pruett was then arrested on a charge of domestic battery.