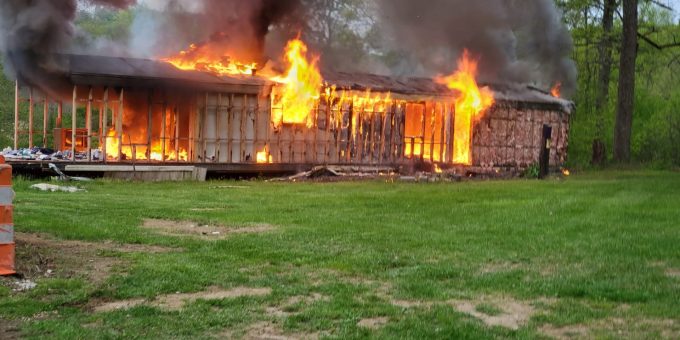 BLOOMINGTON – Firefighters from the Monroe Fire Protection District were dispatched to the 6100 block of East Anderson Road just after 8 p.m. Monday night after a report of a mobile home on fire.

Firefighters from Station 25 on North Old State Rd 37 reported a visible smoke column in the distance shortly after pulling out of the station.

Fire crews arrived on the scene to find an abandoned trailer fully engulfed in flames. The homeowner, who was the 911 caller, confirmed no one was inside the structure, and they had planned to tear it down prior to the fire.

Firefighters deployed two hose lines, one to the front and one to the back, of the trailer and began extinguishing the blaze.

Additional crews arrived and assisted with pulling out debris from the trailer to gain access to hot spots still burning. The fire was brought under control within twenty minutes of arriving on the scene.

Fire investigators examined the fire and ruled it accidental. The homeowner had lit a brush pile on fire in the yard several feet away from the trailer. After starting the fire, the homeowner left to mow the yard. As he was mowing the yard he noticed the trailer was on fire and already fairly advanced.