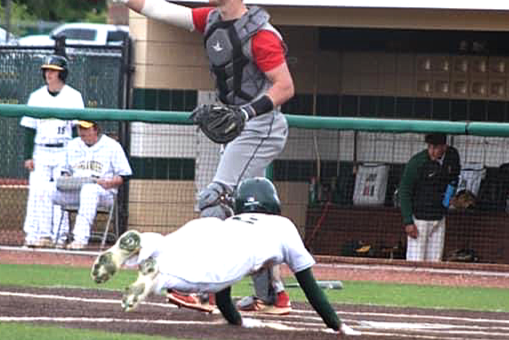 GALENA – Floyd Central erupted for seven runs in the bottom of the sixth inning to conquer Bedford North Lawrence 9-4 during the opening round of the Hoosier Hills Conference baseball tournament on Monday.

The Highlanders broke open a 2-2 deadlock, with Jake Thompson cracking a bases-loaded triple to highlight the rally, while advancing to the semifinal round to face New Albany. The Stars (15-7) fell into the consolation round to battle Columbus East.

Floyd got started with a run in the first against BNL hurler Braydon Brown as Thompson singled and Casey Sorg walked. After a wild pitch, Thompson scored on Caleb Slaughter’s sacrifice fly.

BNL took a 2-1 lead in the third. Kaedyn Bennett was hit by a pitch and Aden Pemberton sacrificed him into scoring position. Cole Karr cracked a RBI double and Evan Waggoner added a run-scoring single. Floyd pulled even in the third when Evan Goforth, an Indiana University recruit, smacked a home run to left.

It stayed that way until the sixth. Two singles, two walks and bunt single gave Floyd a 4-2 edge, and Thompson cleared the bases with his triple. Tristan Polk later added a two-run single.

”It was a good ballgame until the sixth,” BNL coach Jeff Callahan said. “We struggled to get the second and third out. They started hitting the ball. In about four or five pitches, it went south on us.”

The Stars scored twice in the seventh. Colton Brown was hit by a pitch, Karr singled and Waggoner walked to load the bases. Both runs scored on wild pitches.

Karr had two hits for the Stars. Sorg, a Bellarmine recruit, struck out six and allowed only five hits on the mound for the Highlanders. Thompson, Goforth, Sorg and Polk all had two hits each.