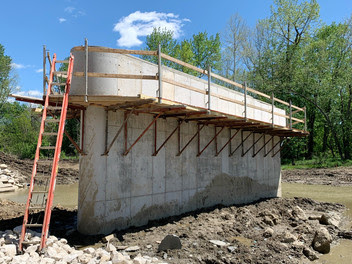 MARTINSVILLE – Delivery and installation of large bridge beams over Indian Creek will close the right lane of State Road 37 northbound and require short rolling stops of traffic most of this week.

Delivery and installation are expected to occur on Monday, Wednesday, and Thursday. The delivery route through Martinsville follows S.R. 67, S.R. 39 and I-69 to the Liberty Church Road exit, where the structural beams will be staged. The right lane of S.R. 37 northbound will be closed between Liberty Church Road and S.R. 39 on these days from 11 a.m. to 6 p.m.

Rolling stops of up to 20 minutes each are expected to occur Tuesday through Thursday. Both directions of S.R. 37 will be stopped for short periods between 8 a.m. and 12 noon on Tuesday to move cranes  used for beam installation. Brief traffic stoppages on S.R. 37 northbound are expected between 11 a.m. and 6 p.m. Wednesday and Thursday as beams are lifted off the truck.

Construction will impact state highways at other locations in Morgan County in the coming weeks.