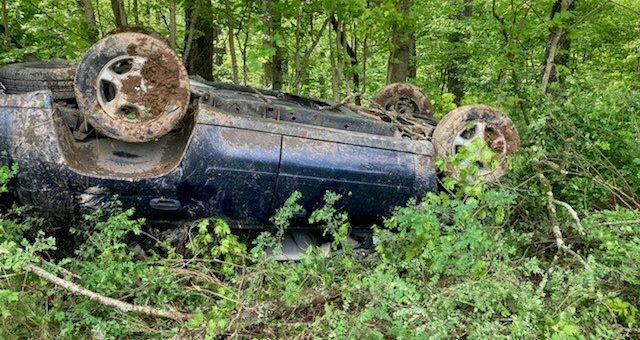 ENGLISH – Today, at around 9 a.m., the Crawford County Sheriffs Department responded to a possible burglary in progress at 4924 South State Road 37 in English.

Once officers arrived at the address, they found a Blue 2007 Chevrolet at the scene, reported stolen from Floyd County. As officers approached the vehicle, the driver put the vehicle in gear, struck an unoccupied Indiana State Police car, and fled the scene.

Crawford County Deputies pursued the vehicle, which fled onto Interstate 64 at the 94-mile marker eastbound.  The pursuit continued eastbound on I-64, at times reaching speeds of 104 miles per hour.

The pursuit continued to the 100-mile marker eastbound, where the vehicle ran over tire deflation devices (stop sticks) officers had set out.  The vehicle continued to flee for a short distance until it crashed off the roadway.

Anthony T. Rainbolt, 29, the vehicle’s driver, was then taken to the University of Louisville for treatment of injuries he sustained in the crash.

Further investigation revealed that Rainbolt had an active warrant from Floyd County for failure to appear on the original charge of illegally carrying a handgun.