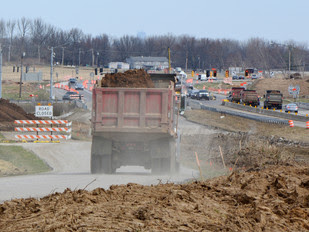 MORGAN CO. – Road crews are kicking off the month of May with paving of the new I-69 lanes in Morgan County.

Starting this week, trucks will be delivering hot asphalt from State Road 144 to the S.R. 37 work zone (between S.R. 144 and Morgan Street).

Daytime lane closures are also scheduled to begin Thursday between Indian Creek and S.R. 39 in Martinsville.  The right lane of S.R. 37 northbound will be closed between 9 a.m. and 4 p.m. to provide concrete trucks with access to the work zone.

Paving work will continue, as weather permits, along 17 miles of the new I-69. S.R. 37 traffic is scheduled to shift onto the new pavement and bridges this summer between S.R. 144 and Morgan Street and reopen to four lanes through Martinsville by the end of the year.

Henderson Ford Road is expected to be restriped on Wednesday for a traffic shift through the work zone northwest of S.R. 37. Road crews will build the new I-69 southbound lanes through this area in phases.

S.R. 37 traffic stoppages are scheduled for midday Thursday and Friday between the Perry Road bridge and the Henderson Ford Road signal. Large concrete beams are being delivered and installed for the new southbound bridge over Stotts Creek.

S.R. 252 traffic near the S.R. 37 work zone in Martinsville may be shifted late this week or early next week. This will allow crews to build new roundabouts at Cramertown Loop and the I-69 entrance and exit ramps.

Huggin Hollow Road remains closed north of Banta Road. Work to connect the existing road with the realigned section is expected to begin this week and take a few weeks to complete.

Expect to see increasing activity along S.R. 37 from Wicker Road to Fairview Road. Contractors plan to mobilize equipment and materials to build the new I-69 southbound lanes and local access roads along the northwest side of S.R. 37.

Crews are closing I-465 shoulders to collect soil samples between S.R. 37/Harding Street and S.R. 67/Kentucky Avenue. Expect shoulder closures and flaggers on roads crossing I-465 as this fieldwork continues. Updates will be posted on Facebook, Twitter, and Instagram.