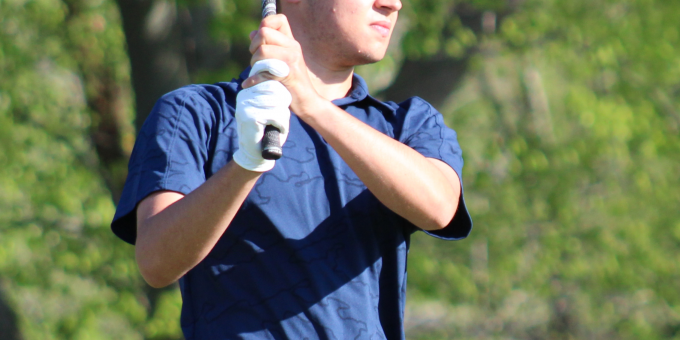 BEDFORD – Some holes at Otis Park, with its idiosyncrasies and quirks, can bare fangs without warning and bite hard. Bedford North Lawrence’s Colten Girgis has a few of those haunting demons among the 18 on his home course. All golfers have their history with a hole that chewed up a great round.

Girgis exacted some revenge during Saturday’s 36th annual BNL Invitational, biting back and tasting victory. The left-hander carded a delicious even-par 72 to earn medalist honors as the Stars finished third in their own tournament.

With five birdies, including four in the first 11 holes, Girgis methodically navigated his way, faltering once with a double-bogey on the 14th hole. He can add that to his haunt list. He had three other bogeys on the belligerent back nine, but he finished with a difficult up-and-down to save par on 18 and celebrated with a quiet fist pump.

“It’s great to have your champion on your home course,” BNL coach Mike Wright said. “You want to defend your turf, and he’s been playing really well. He had a nice, boring front nine and kind of a sporadic back nine.”

Boring? Girgis was special. He made it through the tricky first four holes without incident, then caught fire with birdies on the par-5 sixth (chipping from the fringe to two feet), the seventh (hitting a wedge to two feet) and the ninth (draining a putt from the front fringe). That was a 3-under 34.

His best shot of the day came on the 11th, when his wedge approach hit the flag, threatened to disappear in the cup, then skirted to 15 feet. Perhaps his father’s loud yell from the gallery scared the ball away. Girgis made that putt to dive back to 3-under.

After the tree trouble and three-putt for the double on 14, Girgis recovered with birdie on 15. His best moment might have been the 18th. His tee shot on the par-3 finale sailed directly over the flag but long to the back bank. Standing high above the putting surface, he executed a perfect bounce-and-roll chip to two feet. Thus, the fist pump.

“I had a goal in my mind, a spot on the ground I picked for my chip,” Girgis said. “When I get up-and-down from a spot like that, it’s always a celebration.

“I could have taken a couple of strokes off, but I’m happy.”

His solid start was a key. Taming Otis requires scoring on the front and surviving the back, where the course changes personality and strategy. Girgis was one of only six players to shoot a score in the 70s. He followed his game plan and routine.

“My goal is one-over on the first four holes,” Girgis said. “I’m still kind of haunted by some of these holes here. It’s your home course, you think you should be able to play it well. The third is a hard hole, and No.2 plays a lot different than you think it would. So after that I knew I had something special going on.

“I don’t like to think about the shot too much. I have my pre-shot routine, which I’ve done thousands of times. I know what I want to do before I hit it, I picture how my ball shape should like in the air.”

Picture this: the Stars carded a team total of 333 to finish behind Center Grove (311) and Columbus North (318). Trevin Hutchinson fired an 82 that included a chip-in eagle on the 16th, and Ramzi Girgis added an 89. Jett Jones capped the scoring with 90.

“Colten is heading the right direction,” Wright said. “We just need four other guys to head that direction with him.

“We’re chipping away. Our scores are gradually going down. That’s a positive. But it’s now the second half of the season starting today. Spring training is over. These guys have to figure it out. Excuses are zero at this point and time. We have to ask ourselves ‘Is this who we are?’ Are we going to fight for sub-320s?”

The Stars will be back in action on Thursday, hosting Brownstown and Edgewood.