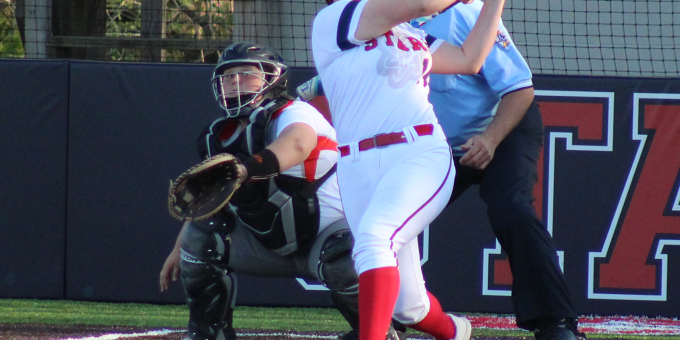 BEDFORD – As a crisp north wind with a hint of winter blew in angst and an unexpected challenge, Bedford North Lawrence shuddered. The offense got a cold chill. For one of the rare times this season, the Stars were facing the back side of a deficit, and that view is never pretty.

Showing the necessary heart, BNL responded with a late rally, powered by Sarah Stone’s monster blast and a clutch single from Brynlea Bennett during a three-run rally in the fifth to subdue Columbus East.

After allowing three runs in the first, the No.6 Stars battled back for a 5-3 win over the deceiving Olympians and maintained their grip on the lead in the Hoosier Hills Conference. Annie Waggoner and Aliza Jewell combined to shut down East’s attack until the BNL bats finally warmed to the occasion.

East slipped to 2-14, although that mediocre mark should be noted by the eight one-run losses or setbacks in the final inning. BNL coach Brad Gilbert called the Olympians “the best 2-14 team in the state.” As if there is a competition for that.

But for many long innings on Friday, East was more than enough competition for the anxious Stars. They finally found their groove with single runs in the third (Stone’s tremendous bomb into the wind) and fourth (Haley Deckard’s RBI single) before the key comeback in the fifth. After the shudder, they shook.

“The bottom line is we got the win,” Gilbert said. “No matter what, nothing matters except getting this win. We didn’t play well offensively early, but we kept thinking ‘next pitch.’ With our offense, hopefully we’re only one or two pitches away from getting back in it.”

East set a stunning tone with the early strike. Two hits and an error set up Kaitlin’s Brummett’s two-run double and put the Stars on the defensive.

BNL inched its way back – if Stone’s rip to center could be measured in inches. It landed halfway up the hill behind the fence in center, about a 250-foot blast. Until that swing, East hurler Megan Kennedy had kept the Stars guessing.

“She did a really nice job of hitting her spots,” East coach Rusty Brummett said. “We didn’t give up and throw down the middle. We just kept throwing closer and closer to until they offered at it. We did a good job of changing locations.

“Sarah is an absolute phenomenal player. She works hard and deserves everything she gets – and I am glad to see her graduate.”

Carlee Kern opened the fourth with a sharp single, went to second on Carsyn Alvey’s single off the glove of diving left fielder Kenzie Sigman, and Deckard smacked a single to right to score Kern.

Stone started the fifth with a walk (one of those unintentional intentional walks on four wide pitches) and Waggoner walked. After a wild pitch, Bennett (who admitted to missing a take sign) greeted reliever Kaylee Smith with a blistered single to left for a 3-3 deadlock.

Pinch runner Britta Warren scored the go-ahead run on a wild pitch, and Braxton McCauley added an insurance run with a sacrifice fly – caught up against the fence in center.

“We were way too anxious early, swinging way too hard at the off-speed pitching and popping up,” Gilbert said. “We finally had some better approaches. We got patient at the right time.”

Waggoner earned the win, going five innings and surrendering six hits. Jewell earned the save with two innings of work.

“I thought we did a good job of settling down and playing a lot better,” Gilbert said. “We didn’t give them much after that.”

Kenzie Foster and Kerigan Greathouse had two hits each for East, which suffered its 12th straight loss.

“It’s a base hit here, a fielding play there,” Brummett said. “We just have to get a little bit better. Any time we keep a team like Bedford to five runs, we’ve done pretty well.”