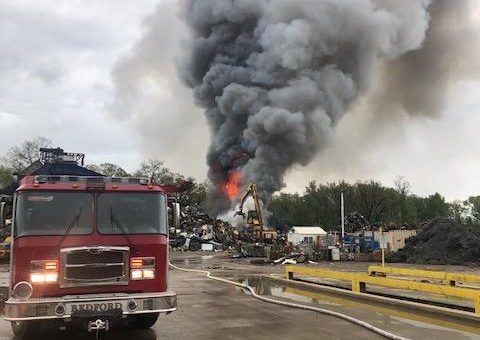 BEDFORD – The fire at Bedford Recycling 904 Summit Lane required a full recall of the Bedford Fire Department on Thursday according to Bedford Fire Chief John Hughes. This meant all three shifts were called in to fight the fire and cover any remaining fires that may be called in within the city.

The call for the fire came in at 11:34 a.m. Thursday bringing all three stations to the scene.

While fighting the fire, one firefighter was treated for heat exhaustion at the scene by IU Health Ambulance Service. Following being treated at the scene he was sent back to the fire station for rehabilitation as a precautionary measure.

The primary goal of firefighters was to keep the fire from spreading to the crane and nearby crusher. If those two pieces of equipment were damaged the whole operation at the Recycling Center would have been affected.

Firefighters remained on the scene until 8:30 p.m. before they were able to return to the fire station, according to Hughes.

“We want to thank Bedford Recycling for using their equipment to help us remove the debris, we worked as a team and we appreciate everything they did for us,” said Chief Hughes.

Lawrence County Emergency Management and Monroe Fire Protection District arrived on the scene for air monitoring to make sure no harmful chemicals were being released into the air.

“There were no harmful readings while at the fire scene, and they also monitored locations at the dead-end of 12th street, as well as a housing addition on U.S. 50 East and by Jiffy Treat,” said Hughes.

According to officials, there were no health threats to the public from air quality issues.

Smoke from the blaze could be seen for several miles with reports of people being able to see the fire from Bloomington.

“We want to thank Ray “Boomer” Christy from Tabernacle of Praise Emergency Services (TOPES) who brought us water, and fed us McDonald’s while we worked the fire,” said Chief Hughes.

At this time the exact cause of the fire is unknown, according to fire officials.

No other injuries to fire personnel or employees were reported.