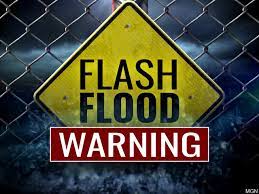 UNDATED – The National Weather Service has issued a Flash Flood Watch through 8 p.m. Thursday evening for the southern third of the state including Lawrence, Martin, Daviess, Jackson, Jennings, and Knox counties.

Rain showers and downpours are to ramp up overnight.

An early wave of showers and thunderstorms brought locally heavy rainfall to Owen and Monroe counties. Ellettsville reported 1.24″ of rain, while Bloomington received 1/3 of an inch.

Showers and t-storms increase later tonight, reaching peak coverage of around 90 percent at or just after 12 a.m. Locally, heavy downpours are expected at times through sunrise Thursday.

Locally, rainfall amounts could top 2 to 3 inches in some spots before ending later Thursday afternoon and evening. High or standing water is possible.

The trend does favor the corridor of heaviest rain would fall in southern and south-central Indiana.