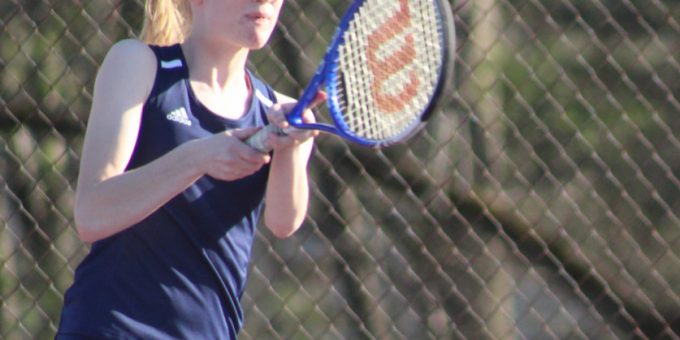 BEDFORD – As the temperature plummeted, Bedford North Lawrence’s game heated up. Maybe the Stars should play all their matches in a freezer. They thrived in the Big Chill.

The Stars, on day better suited for blankets and heavy coats, caught fire for a 4-1 victory over Linton on Tuesday afternoon. BNL swept the doubles while improving to 2-4 and ending a three-match skid.

BNL also posted two wins in the lower singles, with Emily Duncan setting the tone during a 6-0, 6-0 victory over Bailey Near at No.2. Italy Lewis, making her varsity debut, fought through for the most thrilling triumph of the gray day as she stopped Abby Roney 6-1, 4-6, 7-6 (13-11 in the tiebreaker) at No.3.

“Emily was on it,” BNL coach Joni Stigall said. “She had some great shots. Italy did a good job in her first varsity match. I’d like to see her move her feet more, but she’ll figure that out.”

The Stars cruised through doubles with Bella Stigall and Mallory Pride topping Henley House and Cassidy Goodman 6-2, 6-0 at No.1 and improving to 6-1 as a tandem. Kenley Craig and Isabelle Alldredge conquered Maddy Hazelwood and Makenna Lanham 6-3, 6-3 at No.2.

“I don’t know if I’ll ever get to watch my daughter play,” Stigall said with a laugh. “But I feel comfortable with them. I know they’ll figure out out. And we’re expecting that.”

The Miners won the concluding match (which ended with temperatures nearing the freezing mark and spitting precipitation) as Ellie Brewer edged Rachel Kidd 5-7, 6-2, 10-8 (in a final tiebreaker rather than an extended full set) at No.1 singles.

“It doesn’t seem fair to do a tiebreaker instead of a third set,” Stigall said. “I wish she could have played that out. Rachel was playing well.

“Our win as a team was huge. We got some wins at singles, although it’s hard to tell when you’re playing different teams. I wish we could play teams back to back to really see. But we needed this.”