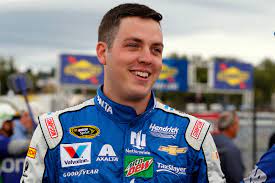 RICHMOND, VA. – Alex Bowman rose to prominence in a final restart, bypassing a dominant Denny Hamlin to cash in on his first NASCAR Cup Series victory of the season Sunday at Richmond Raceway.

Bowman led only the last 10 laps in the No. 48 Hendrick Motorsports Chevrolet to win the Toyota Owners 400. His third Cup Series victory marked his first triumph at the .75-mile Virginia track.

Hamlin, the series’ points leader, held on for second place in the No. 11 Joe Gibbs Racing Toyota. He led a race-high 207 of the 400 laps, but remained winless through nine races this season.

Joey Logano led 49 laps and held on for third in the Team Penske No. 22 Ford. Christopher Bell took fourth with Martin Truex Jr. recovering from a pit-road speeding penalty to complete the top five.

Kevin Harvick’s downed tire and crash with 20 laps left set up a late restart and a final dash to pit road. Hamlin’s crew put him out first with quick service, and the No. 11 beat Logano’s car by half a car length off pit road. But shortly after the green flag re-emerged, Bowman bolted to the front to become the eighth different winner in the series this season.

Hamlin swept both stages — his fourth and fifth stage wins of the season. His top early challenger was teammate Martin Truex Jr., who started from the pole position and led 107 laps. Truex stayed in the hunt for his third Richmond win until a pit-road penalty for speeding on a Lap 295 stop knocked him to 12th in the order.