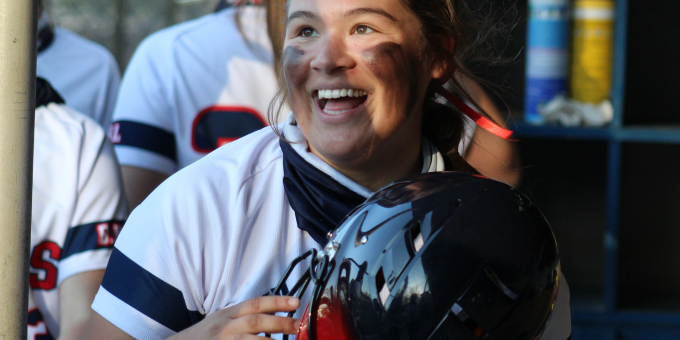 BEDFORD – Zeros for heroes. Bedford North Lawrence’s dynamic hurlers continue to shoot blanks. In this case, with the ammunition the No.7 Stars can unleash in the circle, those bullets are doing major-caliber damage.

The streak is more impressive when looking at the numbers that matter most: walks. Waggoner (1 free pass in 38 2/3 innings) and Jewell have combined for 22 consecutive scoreless innings and have not allowed a walk in 33 straight innings. That’s no coincidence.

Walks will haunt. BNL refuses to be spooked. Better be ready to swing the bat in the box.

“That’s the bottom line, when we have pitching like we did tonight and throws strikes, and our defense played really well,” BNL coach Brad Gilbert said. “They hit their spots, moved the ball around, and we made the plays.”

Waggoner (7-0) surrendered only three hits, all of them softly smacked but well placed, and struck out five. Jewell was perfect in two innings of relief.

BNL got the scoring started in the first as Carlee Kern walked, took second on a wild pitch and scampered home on Sarah Stone’s sharp double. Stone later scored on McCauley’s sacrifice fly – which looked like a sure hit until Linton right fielder Aubrey Ewers made a spectacular diving catch.

The Stars added three more in the third, and another Kern lead-off walk (notice the trend?) set the stage for Stone’s RBI single. Waggoner followed with her two-run bomb to center for a 5-0 lead.

BNL wrapped up the scoring with three more in the fifth. Stone walked, Waggoner doubled to right, and McCauley crushed a full-count pitch to center, complete with bat flip for her first homer, for an 8-0 lead. She made the trip around the bases in record time.

“I was just waiting on the ball in my zone, even though there was two strikes,” McCauley said. “It was low, and I liked it. And that was the result.”

Waggoner and Stone had two hits each as BNL totaled 8. McCauley totaled 4 RBIs and raised her season total to 13. The Stars, bearing down on the team single-season record, now have 16 home runs.

The Miners (3-2) were originally scheduled to host the clash, but wet ground at Linton forced the game site to be switched.

“I don’t know that it would have come out much different,” Linton coach Beth Wernz said. “That’s a good, solid group. They can hit up and down the lineup. And we’re still trying to find things at the plate.

BNL will visit New Albany for its Hoosier Hills Conference opener on Thursday.