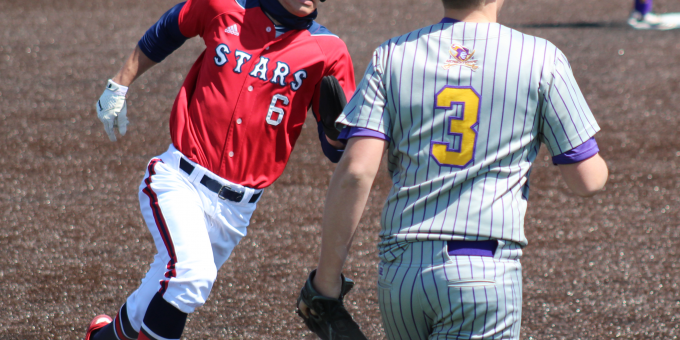 Konley Woodward was a master of complete-game magic on the mound in the opener as the surging Stars blasted North Harrison 18-1 in five innings. In the second contest, little brother Kline – well, little in age only – worked the final four innings to earn a victory and preserve a 4-2 triumph over Eastern Pekin on Saturday.

The Stars (3-1 with three straight wins) spanked the Cougars with 16 hits (including a home run and 4 RBIs by Josh Blunk), then fought off the Musketeers (1-1) with superb relief work by the younger Woodward, who went the final four innings following starter Evan Waggoner and allowed only one hit.

“Konley pitched well in the first game,” BNL coach Jeff Callahan said. “In the second game, Evan doesn’t pitch a lot, but we want to see him out there. He has good stuff. And Kline, that was a tough situation for kid to come in, a close game. He stayed within himself and pitched well.

“Not bad for a freshman. He mixed it up well, and it really helps having Evan (BNL’s star catcher) back there.”

Eastern pulled even in the third as Adam Stewart smacked a two-out, two-run double. Whitt Callahan reclaimed the lead for the Stars with a RBI double in the bottom of that frame.

Enter the younger Woodward, who allowed a lone single in the fifth.

BNL added a key insurance run in the fifth as Cole Karr singled, advanced on an error and wild pitch, then scored on Braydon Brown’s single to center.

Karr, Colton Brown and Blunk had two hits each for BNL.

“That’s a good ball club over there,” coach Callahan said. “I knew they would be solid, not just a show up and roll over them. That was a good challenge.”

The opener was much easier. BNL exploded for 10 runs in the first and was never threatened. The first two runs scored on walks before Blunk bonked a two-run single, followed by run-scoring doubles from Pemberton, Waggoner and Callahan.

Blunk crushed a two-run homer in the third, Ryker Hughes had a RBI double and a run-scoring single in later innings. Six Stars had two hits. The elder Woodward gave up only two hits (and a run in the fourth).

The two wins gave the Stars momentum for a busy week ahead.

“We hope so,” Callahan said. “We talked about playing to our ability, doing things we need to do to win games.”