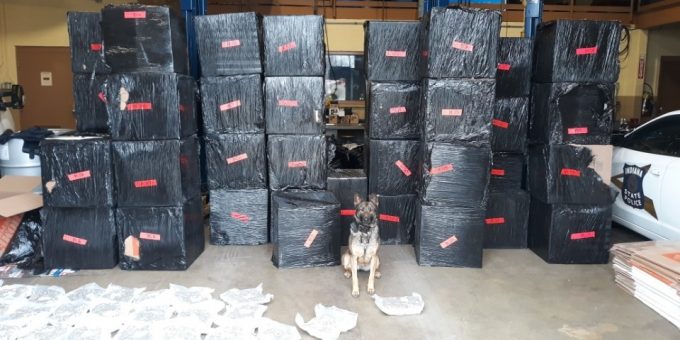 LAKE CO. – On Tuesday morning at approximately 11:15 a.m., a Trooper with the Indiana State Police ACP Team (All Crimes Policing) stopped a vehicle on I-65 near the 240 mile-marker (Lowell exit).  The driver was stopped for a moving violation.

A canine alerted troopers to drugs in the van.

During that search, troopers discovered 38 large boxes and 6 black garbage bags.  The boxes were wrapped in black plastic wrap.  Inside the boxes contained a total of 1,264 individually sealed bags, each weighing approximately 1.5 lbs., and contained green plant material.  A field test of the content revealed it to be marijuana.  The total amount of seized marijuana weighed approximately 1,275 lbs.  A conservative estimated street value of the seized items is approximately $5.7 to $8.5 million dollars.

The driver, identified as 31-year-old Christopher S. Colburn, from McKinleyville, CA, was arrested without incident.  He was later transported to the Lake County Jail and is preliminarily charged with Dealing Marijuana- Level 5 Felony and Possession of Marijuana with Prior Conviction- Level 6 Felony.

All persons named in this release are presumed innocent until and unless proven guilty in court. All charges mentioned are merely accusations, actual charges will be determined by the Lake County Prosecutor’s Office.