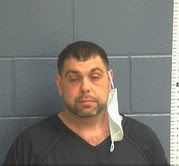 At approximately 3:45 a.m. an Indiana State Police trooper stopped a vehicle for speeding and failing to signal a lane change in Corydon.

The trooper identified the driver as 33-year-old James Thomas Leffler, of Louisville, Kentucky, and observed criminal indicators in the car.

The trooper Boley requested assistance from Harrison County Sheriff’s Department and K-9 Flynn, who alerted officers to possible drugs in the vehicle.

The trooper searched the car and found firearms of various types and lengths in the trunk, along with $28,000 in cash and approximately three grams of marijuana.