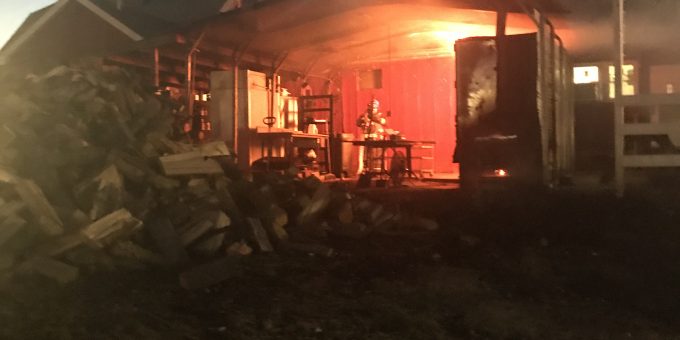 BEDFORD – Smokin Jim’s BBQ was evacuated Tuesday night following a fire in an outside smoker that got out of control.

Smokin Jim’s BBQ employees calmly asked the ten to twenty customers to evacuate the building because their smoker was on fire.

The fire broke out shortly after 7:00 p.m. with firefighters from all three Bedford fire stations responding with three engines and their ladder truck.

Firefighters made sure the fire did not extend into the building and quickly got the blaze under control.

Click here to watch a video of firefighters battling the blaze.

“We will be open tomorrow for business. We have a portable smoker and it will be up and running for business,” said Jerri Gore part-owner of the restaurant.

Employees were alerted to the blaze after a passerby called the restaurant and told them about the blaze.

“We just want to say thank you to Bedford Fire Department they are heroes,” added Gore.

There was no damage to the building, however, a few customers left the establishment without paying their bills.

Firefighters were on the scene until around 7:50 p.m.

There were no injuries reported.