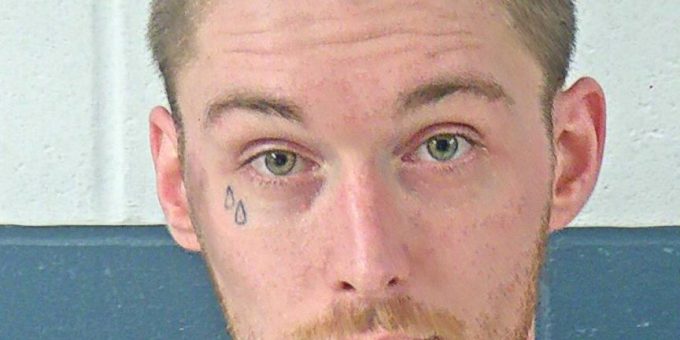 BEDFORD – Bedford Police arrested a man ran from police and drugs were after a traffic stop Friday.

According to a probable cause affidavit, a Bedford Police officer was on patrol when he noticed a driver failed to make a complete stop at the stop sign at the intersection of 22nd and J streets.

The officer attempted to stop the vehicle. The driver, Jacob Deckard pulled into a driveway in the 2410 block of I Street. Once in the driveway, both occupants of the vehicle exited. Both Deckard and his passenger got out of the vehicle and were ordered to get back inside.

The passenger complied, but Deckard became extremely argumentative and ordered the officer off his property but finally returned to the vehicle.

The officer then asked to search the vehicle. Deckard told the officers the vehicle was not his and was hesitant about granting officers consent to search it. K-9 Zazu was requested to the scene and alerted officers to possible drugs in the vehicle.

Officers located a glass smoking device that tested positive for meth. Neither occupant of the vehicle claimed ownership of the pipe.

Officers began a foot pursuit after Deckard that eventually led to an officer deploying his taser. However, the taser was not effective in stopping or deterring Deckard.

Deckard continued to flee and then tripped which enabled an officer to stop Deckard and confiscate the orange zipper bag that was in Deckard’s hand.

Once back at the department, an IU Health Hospital ambulance was requested and the taser barb was removed from Deckard’s back.

Deckard was then transported to jail.

The passenger told police Deckard wanted him to work on his vehicle. He did admit that Deckard offered to pay him for the work in meth.

Due to the passenger’s cooperation he was released.

If you know something, say something. Call the Lawrence County Prosecutor’s Office tip line at 812-545-4700 or send an email to drugactivity@lawrencecounty.in.gov. All calls are confidential.