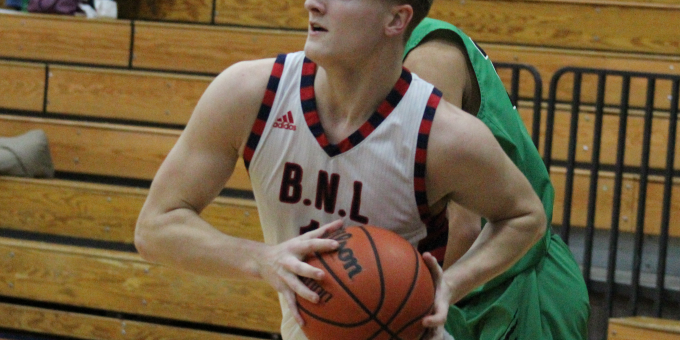 BEDFORD – The goal is common among all 409 teams in the state: Peak at the perfect time, play the best basketball of the season in the state tournament, compete for postseason championships. Few remember conquests in November, while March victories are recorded for history.

Bedford North Lawrence has, with the last three weeks as proof, reached its zenith. The Stars own a three-game winning streak, they’ve won five of their last six, and they completed the regular season with their best performance and most impressive triumph of the year. They are ready.

If momentum is a measurable factor, BNL is a dangerous threat among the six-team field that will clash for the Class 4A Sectional 15 crown this week in Seymour. One way to maintain momentum is having great goals, and the Stars are chasing a title to end a long skid.

New Albany (16-6) will await the BNL-Seymour victor in the first semifinal on Friday, while defending champion Floyd Central (13-5) will face the JC-Jeffersonville winner in the second semifinal. The championship game is scheduled for Saturday.

Sectional success, what was once expected and routine, has escaped BNL for a long time. BNL has not won a sectional game since 2015, has made only three finals in the last 18 years, and hasn’t won a title since 2001. The echoes have faded.

“That’s something we’re trying to get changed,” BNL coach Jeff Hein said. “The way we’re playing now allows us to play with people, and our kids are very confident.

“We’ve had a great week. Winning three games in a week is tough to do. We have played well at the end of the season, which is what you want. But you never know, when the tournament hits, what will happen. It’s one game at a time. It’s a one-and-done situation, so we hope we have the confidence to play well.”

BNL should be percolating with confidence, especially following the 65-50 win over Evansville North to conclude the campaign. The Stars also own a regular-season win over the Owls, a 44-36 road victory on Jan. 22. They might be overlooked as trophy favorites – that label goes to the three teams that shared the Hoosier Hills Conference crown – but they will be a tough challenge for anyone in the field.

“The tournament is really built around seniors,” said Hein, who has three in the starting lineup and six on his roster. “It’s their last go-around. I think they’re excited and want to continue to play. We’re playing our best basketball at the right time. If we can continue to do that, we can be dangerous. I think our kids know we can play with anyone on any given night.”

The only important question now: can the Stars vanquish Seymour for a second time?

Seymour, with its ultra-conservative style and low-scoring contests, requires a game of poise and patience, of the utmost execution and protection of possessions. The Stars did that perfectly during the first encounter, with Colten Leach scoring 16 points to lead the attack.

The key that night was an early lead. BNL rumbled to a 13-3 advantage, allowed only 9 points in the first half, and muscled to a 40-23 lead before the Owls closed with a late flurry of bombs and pressure. BNL also had balance as Ben Cosner and Kooper Staley totaled 8 points each and Colton Staggs added 7.

“It is important to get ahead early,” Hein said. “We could control what we wanted to do. They’re very deliberate, so if they get ahead they can hold the ball a little bit, spread the floor.”

Seymour’s leader that night was sophomore Landon Fritsch, who came off the bench to score 14 points while Eli Meyer had 13. Fritsch used that game as springboard to more contributions and a starting role.

“Fritsch is playing really well,” Hein said. “He can shoot off the dribble. They rely a lot on their post players (with Meyer and Casey Regruth), but Fritsch has really came on and given them a lift. He can open the floor for their big players.”

BNL will counter with Leach (13.5), Cosner (11.3), Staley (10.0) and the fast-improving Staggs, who scored 37 points during the three wins last week and has hit 10 of his last 11 shots. His emergence as a fourth option has made the Stars difficult to handle.

“He’s played really well, with a lot of confidence,” Hein said. “He looks very comfortable out there, and it’s great to see. He’s had some big games, and it takes the pressure off the other three. It gives us another weapon.”

Jeffersonville vs. Jennings County: In the second first-round game, the Red Devils are red hot, with six straight wins and 9 in the last 10. They are one of the title favorites after charging to a share of the HHC championship.

“The guys have been playing realty well lately, playing together,” Jeffersonville coach Andrew Grantz said. “I feel our team cohesiveness has really come together. Guys have been buying into that.”

The Devils feature the double-barrel firepower of junior scoring leaders Will Lovings-Watts and Brandon Rayzer-Moore, who combined for 43 points during a dominating 72-43 win over Jennings on Feb. 13. They have also been even more formidable since the mid-season addition of senior Jaylen Fairman, who transferred back to Jeffersonville after two seasons with Jeffersontown in Louisville. He’s been a stabilizing force.

Jennings lacks that impetus for the postseason. The Panthers suffered a 65-43 loss at Madison, which cost them a share of the league title, on Friday night. But they still have threats in 6-8 post player Jacob Vogel (who had 13 points against the Devils) and sophomore point guard Keegan Manowitz.

Jeffersonville has been a constant force in the sectional since the formation of the class system, winning six times. The Devils last won the title in 2019.

“I asked the guys to define what success meant, and every one of them said winning,” Grantz said. “I challenged them to think a little bit differently. It’s the process very single day of trying to be as close as possible to full potential, as often as we can.

“So we’re looking to approach this one possession at a time, at the highest level possible, over and over again. If we do that, the results will take care of themselves.”

Last meeting: On Jan. 22 at Seymour, the Stars posted a 44-36 victory. Colten Leach scored 16 points for BNL, while Landon Fritsch had 14 off the bench for the Owls.

Game notes: BNL is seeking its first sectional win since 2015 and its first championship since 2001. Seymour hasn’t won a sectional since 1992. The Stars, facing the Owls in the sectional for the first time since 2007, own a 4-1 series lead over Seymour in postseason meetings.

Last meeting: On Feb. 13 at Jeffersonville, the Red Devils blasted the Panthers 72-43. Will Lovings-Watts had 23 points and Brandon Rayzer-Moore added 20 for the Devils. Jacob Vogel had 13 points for Jennings.

Game notes: Jeffersonville has won 38 sectional titles in program history, the last in 2019, while Jennings County hasn’t won a championship since 2005.