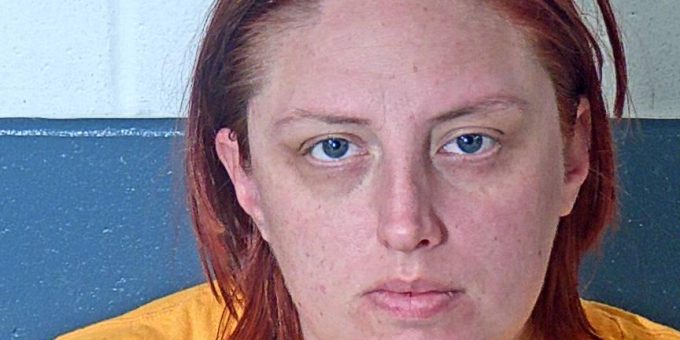 (BEDFORD) – A Bedford woman was arrested Wednesday morning after a warrant was issued for her arrest.

According to a probable cause affidavit, on Wednesday, September 23, 2020, at approximately 3:04 p.m. an Indiana State Police trooper was patrolling on Reuter Lane when he noticed the driver of a white Lincoln Town Car traveling in front of him suddenly make three very quick small swerves and suddenly apply the brakes hard and turn into a long driveway.

The trooper stopped the driver, who was Lacey Sweany. The trooper said Sweany was extremely nervous and so was her passenger.

Upon the troopers request, Sweany looked for her driver’s license and registration in her purse. At this time, the Trooper witnessed Sweany remove a small pouch from her purse, open it and close it immediately. Sweany then began to demonstrate more nervousness than before.

“It was almost like Sweany had lost all train of thought  and her carotid artery began pulsating even harder,” the trooper wrote.

The trooper allowed her to get a cigarette before exiting the vehicle after she stated she was feeling ill and needed a cigarette.

A Mitchell K-9 unit was requested to the scene to assist.  K-9 Jack alerted officers to possible drugs in the vehicle.

The trooper gave Sweany permission to retrieve a cigarette from her vehicle per her request. During the search of the vehicle, underneath the purse was a clear plastic bag containing  crystal meth. Inside the purse, a trooper located a red pouch, the same pouch Sweany had opened to find her driver’s license, which contained two baggies that contained crystal meth residue. They also found a baggie that contained one Xanax tablet. A rolled dollar bill that had meth residue on it was also found. Police say the dollar bill was used to snort the drug.